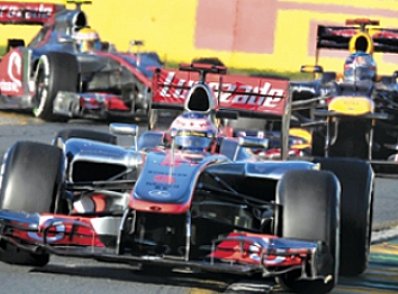 PHUKET: Jenson Button of McLaren reveled in his “dream start” at e opening race of the 2012 Formula 1 season at the Albert Park Lake street circuit in Melbourne.

Sebastian Vettel of Red Bull managed to gain second by making good use of the safety car on lap 37 to pit, and emerged ahead of Lewis Hamilton, who finished 4.075 seconds off the pace in third.

“I thought I would be in a good position to have a go at Jenson, but two corners and he was gone,” said Vettel.

Hamilton started in pole position, but during the “launch phase” he suffered a lack of traction and his teammate passed him to take the lead and remain there for the entire race.

‘t my day,” said Hamilton. “I just have to keep my head down and my day will come.”

Mark Webber, in front of his home crowd also suffered from a poor start and dropped to ninth; however, the second Red Bull driver managed to fight back to gain fourth spot at the finish.

Fernando Alonso took fifth for Ferrari, though only after Williams’ Pastor Maldonado touched the artificial grass and crashed into the wall after harrying the Spaniard for eight laps.

This weekend the action moves to the Sepang circuit in Malaysia, with the race due to start at 3pm Phuket time.

The track is one of the most demanding on the F1 calender, with tight cornering and long straights providing drivers with ample opportunity to overtake.

It is expected that McLaren and Red Bull will contest the podium, with Button and Hamilton relishing the opportunity to build upon last week’s result.

It is thought Sepang will also show the shortcomings of Ferrari’s car. More importantly for many is: Will Kylie Minogue show?

Derby heats up the race

Tottenham Hotspur’s match with Cheslea at Stamford Bridge is the pick of action this weekend, and will give the Blues’ caretaker manager Roberto Di Matteo his first major test in the Premiership.

Fernando Torres finally broke his 24-match dry spell with two against Leicester as they advanced in the FA Cup, and if he can continue to find the net it will be a huge bonus to Chelsea in the scramble for that vital fourth spot .

Whilst Chelsea are in a good vein of form after the departure of Andre Villas-Boas, the Spurs are not.

Harry Redknapp has offered counseling to his players following the incident at Bolton.

At the foot of the table, QPR, Wigan and Wolves all have difficult away-matches and will probably be happy for a point in their respective battles to avoid relegation.

Bolton Wanderers, who are just one point above the drop zone, will face the Blackburn Rovers who are in 16th, five points ahead.

Owen Coyle will see the game as a must-win for Bolton in their own bid for safety, and it will take all of his managerial experience to pick his side up following last weekend’s sad incident concerning Fabrice Muamba.

Wales took the Six Nations title and their third Grand Slam in eight years beating the French 16-9 in a closely fought battle at the Millennium Stadium.

Emotions were running high before the start with a minute’s silence observed for former Welsh Grand Slam winning captain Mervyn Davies, as well as Jock Hobbs, the ex-All Blacks skipper.

The Dragons have to thank Alex Cuthbert and his moment of individual brilliance when he carved his way through the French defensive line to give Wales the advantage 7-3, after Dimitri Yachvili had put the first points on the board for “Les Bleus”.

Leigh Halfpenny converted Cuthbert’s try and added a penalty, before Yachvili kept France in touch with another three points.

Whilst Rhys Priestland and Halfpenny both had kicks come back off the uprights, it was Halfpenny, probably player of the tournament, whose 52-yard penalty took the game away from the French for Wales to run out Grand Slam victors.

England had their best win of the competition with victory over Ireland 30-9, secured by the domination of their front row.

Scotland’s failure at the Stadio Olimpico, losing 13-6, as Giovanbattista Venditti’s try seperated the teams, collected the Wooden Spoon for the first time since 2007.

India’s Sachin Tendulkar finally secured his 100th international century to become the first player to reach this historic milestone, after being in the “nervous nineties” twice since March last year.

To put the record into context, the second leading century maker is Ricky Ponting, on a ‘lowly’ 71.

He scored the record-breaking run against Bangladesh with a single off Shakib Al Hasan, and was eventually dismissed for 114.

Swiss superstar Roger Federer is setting his sights on more Grand Slams, after winning his third-straight tournament in Indian Wells.

The 16-time Grand Slam winner had to fight off a cold and a strong field to capture his fourth Indian Wells title.

Federer said after beating John Isner 7-6 (9/7), 6-3 in the final that his biggest wish this year is to win a gold medal at the London Olympics and to reclaim the World No 1 ranking.

Many were starting to write Federer off when he turned 30 and his game dropped off a bit.

Muamba, only 23-years-old, was born in the DR of Congo, though represented England in the Under-21s, making 33 appearances.

Medics spent six minutes resuscitating him on the field before transferring him to the London Heart Hospital.

His condition is now stable, and his family have offered thanks for all the support and prayers given.