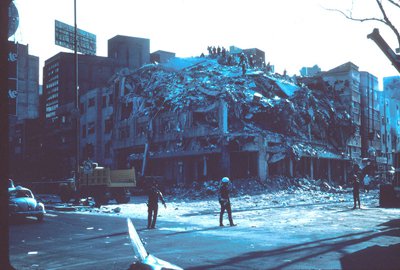 PHUKET: Two deaths were reported on Friday after a powerful 7.4-magnitude earthquake struck southwestern Mexico on Tuesday, damaging tens of thousands of houses.

The first victim, identified as Ernesto Bernal Ruiz, died after being crushed by a falling wall in the small community of El Tamale in Guerrero state. The second, 90-year-old Juan Chute Bruno from San Nicolas, also in Guerrero, died of a heart attack caused by the earthquake.

In addition to the fatalities and 11 people who were previously reported injured, at least 15,000 people have lost their homes in the state of Oaxaca, where damages caused by the temblor are estimated to exceed 90 million pesos ($7 million).

In Guerrero, Governor Ángel Aguirre Rivero requested assistance to provide 10,000 residential homes for those affected, as well as 20,100 reconstruction packages for damaged homes.

According to the United States Geological Survey’s (USGS) preliminary earthquake report, the epicenter of the quake, which occurred at a depth of 17 kilometers (10.5 miles), was in the state of Guerrero, around 186 kilometers (115 miles) east of the popular port city of Acapulco and about 25 kilometers (16 miles) east of Ometepec, both in the same state.

The strong earthquake was felt up to Mexico’s central region, causing numerous buildings in Mexico City to be evacuated.

On September 20, 1985, one of the most devastating earthquakes struck the coastal area of Michoacan, although most of the damage was seen in Mexico City. Initial government reports indicated that some 6,000 to 7,000 people died, although further investigations revealed that approximately 10,000 had been killed.

Phuket Gazette: Aviation deal between Israel and the EU expected to boost tourism