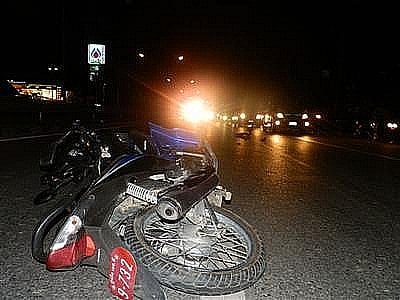 PHUKET: Phuket Police are seeking the driver of a white sedan involved in a hit-and-run accident that left a motorbike driver critically injured on Thepkrasattri Rd in Thalang last night.

The accident happened at about 9:30pm on Thepkrasattri Rd southbound, opposite the new PTT service station in Srisoonthorn Village 1.

Thalang Police and Kusoldharm Foundation workers rushed to the scene where they found 25-year-old Suriya Thathamlay lying unconscious on the pavement. He was rushed to Thalang Hospital for emergency treatment of critical injuries, including a severe head wound.

Mr Suriya is listed as a resident of Nongharn District, Udon Thani. He was driving southbound toward the Heroine’s Monument when he was hit by a white sedan which continued southbound without stopping.

Police radioed details of the accident to officers at the nearby Heroines’ Monument police box in the hope of intercepting the sedan, but thus far no arrests have been reported.

Avoidance of responsibility for accidents on Phuket’s roads is a common practice, with drivers either not stopping at all or, when their vehicle is damaged, fleeing on foot.

Police don’t know the make or license-plate number of the car involved in last night’s accident, but they expect damaged parts of the vehicle collected from the accident scene to help them bring the driver to justice.