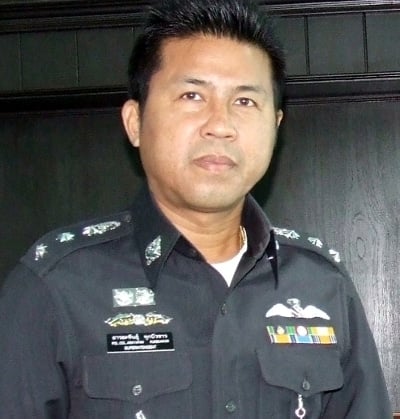 PHUKET: Phuket Governor Tri Augkaradacha has called for police to boost gun security after a man was gunned down while riding home along the Kalim beach road last night.

“Both men pulled out guns at opened fire on Mr Jakkrit, then sped off toward Kamala,” said Col Arayapan.

Police believe the killing may have been motivated by a land dispute over Mr Jakkrit encroaching on private land in a street off Phra Baramee Road.

“The issue was being mediated through the court and they were going to settle the dispute soon,” Col Arayapan said.

“Another possible motive is that Mr Jakkrit had borrowed a couple of hundred thousand baht from a man in Yala province. Apparently the man had threatened Mr Jakkrit over repayments,” he added.

Police are continuing their investigation and checking police CCTV cameras along the road to try to identify the gunmen.

“If we come up with clear descriptions we will ask other police stations to keep an eye out for the men,” Col Arayapan said.

The connection of Mr Jakkrit’s murder with yet another land dispute in Phuket has prompted Governor Tri to call for police to step up gun control.

“I have ordered the police to handle this case carefully and to arrest the man who committed this crime,” said Governor Tri.

“I have also ordered the police at Tah Chat Chai checkpoint [leading to the mainland] to step up their inspections of people passing through the checkpoint. Anybody found in possession of a weapon must present their license to the police when asked.

“If they don’t have enough officers at the checkpoint, I am happy to provide them with more officers so they can do this,” he added.

The murder of Mr Jakkrit last night follows the assassination of Wisut “Ae Inside” Tangwitthayaporn in broad daylight on Thursday. Both murders are believed to be over illegal occupation of Phuket land.