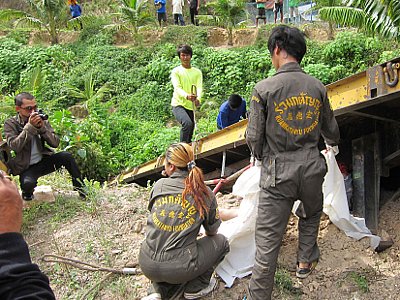 PHUKET: A truck driver taking a nap beneath his 18-wheeler was run over and killed when the rig’s brake system failed at a hillside construction site in Phuket yesterday.

At about 12:30pm Kamala Police and rescue workers from the Kamala Ruam Katanyu Foundation were called to the scene, a construction site off Soi Nakalay in Kamala Village 6.

[The Kamala Ruam Katanyu Foundation is Phuket’s smallest emergency rescue organization. With no office and an all-volunteer force, their area of work is confined to Kamala Police District. The Phuket group is part of a much larger national organization with numerous branches in Bangkok.]

At the scene they found Mr Boonruam’s body pinned beneath the flatbed trailer. He died of massive wounds to the midsection when the rig’s wheels ran over him.

Witnesses said Mr Boonruam parked the rig on a hilly section of the dirt access road, then set up a makeshift hammock beneath the flatbed to take a nap while waiting for workers to unload a shipment of ‘rebar’ (steel reinforcing rods for concrete) that he had just delivered from a factory in Bangkok.

When the truck’s parking brakes failed, the rig ran about 100 meters downhill before coming to a stop in a roadside ditch.

Rescue workers needed to use two cranes at the site to remove Mr Boonruam’s body from beneath the vehicle.

Kamala Police consigned Mr Boonruam’s body to Kamala Ruam Katanyu Foundation workers for transport to Patong Hospital, where it will be held until it can be claimed by relatives.