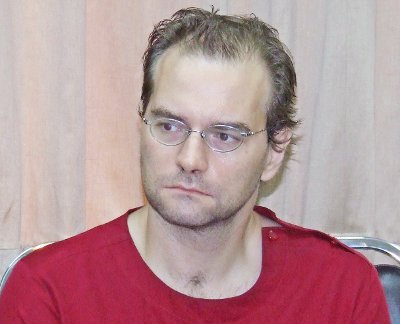 PHUKET: The Phuket Attorney General’s Office is considering filing an appeal over the sentence of 10 years and three months imprisonment handed down to former US Marine Ronald Fanelli for the stabbing murder of bar hostess Wanphen Pienjai last year.

Fanelli was formally handed down a sentence of 20 years imprisonment for murder and another six months in jail for hiding the body, Phuket Provincial Deputy Chief Public Prosecutor Permgiart Bumrung, the lead prosecutor in the case, told the Phuket Gazette.

“The sentence was halved to 10 years and three months because he confessed,” he explained.

During the trial, the court heard that Fanelli confessed to killing Miss Pienjai by stabbing her, but said it was an “accident”.

Police presented evidence to show that Fanelli disposed of Miss Pienjai’s body by stuffing it into a large suitcase – posthumously breaking both of her legs so he could fold them into the luggage.

“He kept the body in the room for two days before disposing of it,” said Mr Permgiart.

Fanelli carried the suitcase by motorbike to a remote part of Wichit. He dumped the suitcase several kilometers from his rented home, where he was later arrested, the court heard.

Prosecutor Permgiart said Fanelli has until December 1 to appeal the verdict. “We are also considering filing an appeal over the reduced sentence because 10 years is not a long sentence for a case like this,” Mr Permgiat said.

The private lawyer who defended Fanelli in the case, who asked not to be named, on Monday said, “I have yet to discuss [an appeal] with my client. I am also waiting for US embassy officials to discuss what they would do like to do further with the case…

“As for whether or not we will file an appeal, that all depends on my client,” she added.

Prosecutor Permgiat explained that the US embassy had filed a letter to the court through the defense lawyer. “The US embassy explained in the letter that Fanelli is a former Marine who served in Afghanistan for several years. He killed many people during his tour of duty, and this could well have affected his behavior,” he said.

Phuket Provincial Prison Director Rapin Nichanon revealed that the reduced sentence will be further reduced by the 471 days that Fanelli has served in detention.

“As Phuket Prison accommodates prisoners serving sentences up to 15 years, he can stay here if chooses to,” Chief Rapin said.

“However, he has the right to contact his embassy and ask to be transferred to another prison, such as Klong Prem Prison in Bangkok, which would be more convenient for him if he wants to stay in regular contact with embassy officials,” he added.

Phuket officials push for buses from airport to main beaches