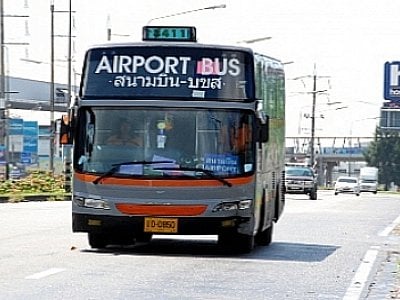 PHUKET: Phuket Provincial Land Transportation Office (PLTO) Chief Terayout Prasertphol has announced that his office will apply for Phuket to have two new bus routes operating from the airport: one to Rawai and another running through Patong to Kata-Karon.

He expects bus services along the new routes to be in operation by February.

“The next step is to apply to the Department of Land Transport in Bangkok. If they approve, we can then offer concessions for private operators to provide bus services on those routes,” said Mr Terayout.

The services will offer “hop on, hop off” bus stops. Exactly where the bus stops will be is to be discussed at the next Provincial Transportation Committee meeting, for which a date has not yet been set, he added.

The Airport Bus Phuket company already provides services on one route, from the airport to the bus terminal on Phang Nga Rd in Phuket Town.

The other two concessions are for a bus service within Patong and another from the airport to Kamala, Patong, Karon and Kata.

“However, no operators applied to provide bus services on those two routes for fear of being attacked by ‘mafia’,” Mr Terayout told the Gazette.

“When we apply to Bangkok for permission to offer concessions for the two new routes, we will also apply to revise the Airport-Kamala-Kata route,” he said.

“We got approval for this route when I was chief here a few years ago. At that time, no bus owner bid for this route because they were afraid of being attacked.

“This time the situation has changed. People are more aware of creating a good reputation for Phuket. With the revised routes, we are sure that kind of problem will not happen again,” Mr Terayout said.

The conditions of the concessions to be offered stipulate that all buses be air conditioned, seat no more than 30 passengers and have room for tourists’ luggage

“Airport limousines cannot protest because it is our duty to arrange transport services for the public, and taxi operators in Patong and Kata-Karon should be glad because the bus will bring them customers,” said Mr Terayout.

“When tourists get off at Patong or Kata Karon, they will ask a taxi or motorcycle driver to take them to their hotel,” he added.