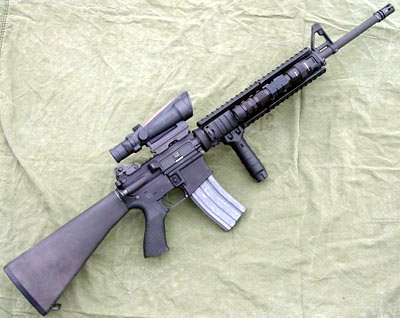 PHUKET: Phuket police early this morning arrested a long-term expat and his wife after finding what they identified as an M16 automatic assault rifle with a loaded clip in the back of their car.

“Both are residents of Kathu. They live in a residential estate near the Loch Palm Golf Course and have two children together,” he explained.

The couple had just left the Isarn Return Pub and Restaurant near Kathu market and were driving towards Patong when they were arrested.

“I have yet to be informed of the full details of what happened. At this stage all I know is that the officers involved believed the couple were ‘acting suspiciously’, so they stopped and searched the vehicle,” Lt Col Chana said.

“In the back of the car, a white Honda CR-V, they found an M16 and one magazine loaded with ammunition,” he said.

The M16 is the primary service rifle of the United States Military, with semi-automatic and fully-automatic variants. Police did not provide information regarding which variant the rifle was in the car.

During questioning Mr Vaclavik told Lt Col Chana that he had just returned from a trip abroad on his yacht, which was at a marina at Ao Por.

“He said that his yacht needed repairs so he had to take everything off the boat while the repairs were being made. That included the M16,” Lt Col Chana said.

Mr Vaclavik said he bought the rifle in the Philippines and that it was only for self-defense, as sometimes during his trips abroad he needed to sail into the dangerous pirate-infested waters off Somalia, he added.

Both are being held at Phuket Provincial Prison.

They are to be presented to Phuket Provincial Court on Monday, said Lt Col Chana.

Mr Vaclavik has lived in Phuket for about 15 years, police said.

Until recently, he was a part owner in the Phuket Tropical Inn resort on Nanai Road in Patong.

“He is no longer involved in the hotel. He sold his partnership six months ago,” a staff member at the hotel told the Phuket Gazette today.

One local media report speculated that the arrest may have been the result of a possible business dispute.