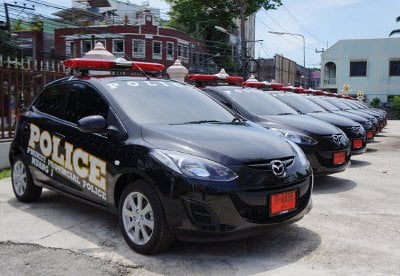 PHUKET: Phuket Police will soon be patrolling the streets of Phuket in brand-new all black Mazda2 cars.

“The new patrol vehicles are expected to improve our international image and help our relations with tourists,” said Lt Col Charturong.

The only two districts not to get the new cars are Thalang Police and Thung Thong Police, which has jurisdiction over Kathu sub-district.

“Before, we used old pick-up trucks to conduct patrols and for traffic control, but the new cars will be used for patrolling only,” Lt Col Charturong said.

Immigration tops list of “most worn-out complaint’ in Phuket poll