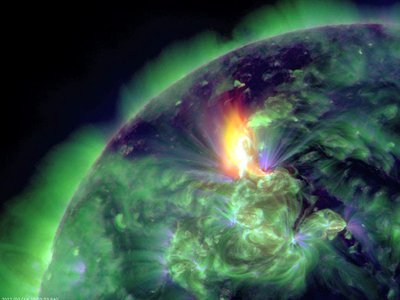 PHUKET: The BBC has reported a strong solar storm is expected to hit Earth shortly, and experts warn it could disrupt power grids, satellite navigation systems and plane routes.

The storm – the largest in five years – will unleash a torrent of charged particles between 3pm and 10pm (local Thailand time), US weather specialists say.

They say it was triggered by a pair of massive solar flares earlier this week.

It means there is a good chance of seeing the northern lights at higher latitudes, if the skies are clear.

The effects will be most intense in polar regions, and aircraft may be advised to change their routes to avoid these areas.

“It’s hitting us right on the nose,” said Joseph Kunches, an expert at the US National Oceanic and Atmospheric Administration (Noaa).

He described the storm as the Sun’s version of Super Tuesday – in a reference to the US Republican primaries and caucuses in 10 states.

“Space weather has gotten very interesting over the past 24 hours,” Mr Kunches added.

Images of from the Sun’s region where the flares happened show a complex network of sunspots indicating a large amount of stored magnetic energy.

Other solar magnetic storms have been observed in recent decades.

One huge solar flare in 1972 cut off long-distance telephone communication in the US state of Illinois.

Further information from NASA: The sun erupted with one of the largest solar flares of this solar cycle on March 6, 2012 at 7PM EST. This flare was categorized as an X5.4, making it the second largest flare – after an X6.9 on August 9, 2011 – since the sun’s activity segued into a period of relatively low activity called ‘solar minimum’ early in 2007. The current increase in the number of X-class flares is part of the sun’s normal 11-year solar cycle, during which activity on the sun ramps up to ‘solar maximum’, which is expected to peak late next year.

These X-class flares erupted from an active region, designated AR 1429, that rotated into view on March 2. Prior to this, the region had already produced numerous M-class and one X-class flare.

The region continues to rotate across the front of the sun, so the March 6 flare was more Earthward-facing than the previous ones. It triggered a temporary radio blackout on the sunlit side of Earth that interfered with radio navigation and short wave radio.

In association with these flares, the sun also expelled two significant coronal mass ejections (CMEs), which are travelling faster than 600 miles a second and may arrive at Earth in the next few days.

In the meantime, the CME associated with the X-class flare from March 6 has dumped solar particles and magnetic fields into Earth’s atmosphere and distorted Earth’s magnetic fields, causing a moderate geomagnetic storm, rated a G2 on a scale from G1 to G5. Such storms happen when the magnetic fields around Earth rapidly change strength and shape.

A moderate storm usually causes aurora and may interfere with high frequency radio transmission near the poles.

Phuket Gazette: Seventh person executed in the US this year