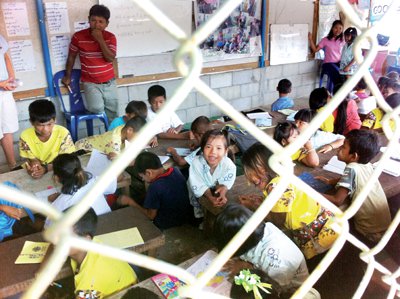 PHUKET: Seven intrepid stand-up paddlers will take to their boards on March 13 to navigate the 90 miles around Phuket over five days. The circumnavigation of Phuket is to raise funds to build a school for impoverished children in the Rassada Port area, on the east side of Phuket Town.

The port area is well known as one of the poorest areas on the island. Most of the jobs at the port are taken by Burmese migrants, as no one else will do them or live in the unsanitary conditions there.

Sister Lakana from charity organization The Good Shepherd Sisters has for years worked tirelessly to help the migrants who live in these poor conditions. She noticed some children were left at the Burmese camp during the day, while their parents were at work. Without supervision, they sometimes got hurt, or worse still, fell prey to physical or sexual abuse.

“Many of the Burmese migrants living in the area are in Phuket legally, but as their children are not able to read or write Thai, they are not able to join the Thai school system,” Sister Lakana explained.

To keep the children safe, Sister Lakana started a daycare center while their parents worked. A local Thai landlady donated a small area measuring 10 x 5 meters, a concrete block was put on the floor and makeshift walls of fishing net created around it.

The center opened in August 2010 and 20 children were quickly registered there.

Word soon spread. “By January 2011, there were 115 children – ranging from two to 14 years old – registered at the center. Some had never been to school before,” said Sister Lakana.

However, the “school” remains seriously under-resourced. “Eight grade levels share the small space of two rooms. There are no tables or chairs. The children sit on the floor and are provided with the minimum of a pencil and paper.

“The students, however, love the simple place and they cram into the limited area with big smiles on their faces, eager to use this opportunity to learn and improve their lives,” Sister Lakana said.

All school expenses including teachers’ salaries have come from fund-raising events and private donations. Monthly expenses total about 80,000 baht a month.

“This also includes a Thai nurse who visits the school, as well as local Burmese camps, tending to the sick, who are not allowed to be treated in the local hospitals,” said Sister Lakana.

The drive now is to raise funds to build a community center with classrooms for the kids. The local Thai community has seen the work that Sister Lakana and her volunteers do at the school. They have recently come together to donate a small piece of land.

Quintin Clover, who came up with the idea of literally paddling around Phuket for charity, was quickly joined by Tal Derhy, Nathan Chilcott, Tim Campbell, Andrew “Easy” Eadie, Luke Remmers and Arend Moelich.

“We will start at Skyla’s Beach House on Kamala Beach and turn left [south] in the very early hours of Tuesday morning. We will be aiming to appear over the horizon five days later for the Welcome Home Party and fundraiser for the school,” said Quintin.

“The hardest day will be Day Three, when our muscles will be aching, but we have allowed extra time just in case bad weather forces us to stop early for a day,” he explained.

The crew have been in training for months. “I am on the water for about five hours every Saturday, covering about 30 kilometers. On weekdays, because of work, I do 45 minutes of hard paddling four mornings a week,” said Quintin.

Although the crew will have a support boat provided by Jim at Phuket-based Stand Up Paddle Thai, the trickiest part will be going under the bridges at the north end of the island.

“We will be going through the channel during a rising tide nearing a full moon, which should help push us through,” explained Quintin.

Confident his crew will complete the challenge and accomplished their objective, Quintin hopes the event will become an annual one.

“I have been speaking with the potential developers of the school and there is now an option whereby we can get a school and community center built for 5.2 million baht, as opposed to the initial 9mn baht,” Quintin said.

However, he added, “The price would fall further if someone stepped in to sponsor things like the plumbing and so on.”

The money raised will also go towards providing transport for the kids so they can get safely to and from the school, he added.

“At the fundraiser at Skyla’s Beach House on March 18 we will have raffles and fun activities for the kids, and also a treasure chest in which people can donate all sorts of household items as well as toys for the kids,” Quintin said.

Donations can be made by bank transfer to:
Bank Name: Kasikorn Bank
Branch: Cherng Talay, Phuket
A/C No: 486-2-11838-9
A/C Name: Lakana Sukhsuchit
Swift: KASITHBK
Please email: quintin@standupphuket.com for more details about making a donation. Also, please email him after each donation is made so records can be kept and processed accordingly.