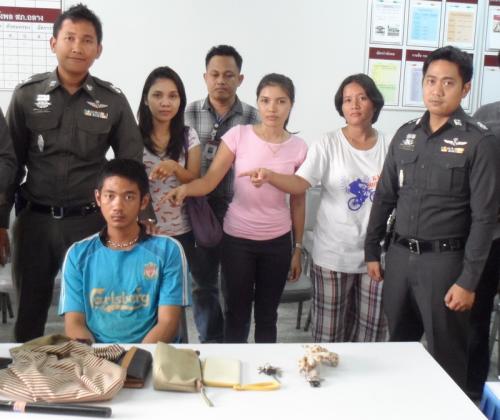 PHUKET: Thalang and Phuket City Police have arrested a bag snatcher who reportedly committed 20 snatch thefts within two weeks, and three yesterday in the hours before his arrest.

“We arrested Boonserm Chaluaysri, 22, yesterday after we received a report from Phuket City Police of a bag snatch in Rassada in the morning,” Thalang Police case investigator Chatree Chuwichian told the Phuket Gazette.

“Phuket City Police were in pursuit of the thief and called for assistance as the thief had entered our jurisdiction,” he added.

While Thalang Police were setting up checkpoints to snare the thief, they received a report of another bag snatch in their area – from a lady in front of Tha Rua temple in Srisoonthorn.

“We believed it was same thief, as the description of the motorcycle was the same,” Capt Chatree said.

About 20 minutes later, Thalang Police received a report of yet another bag snatch, this time from a lady in front of a supermarket in Baan Yamu.

“The description of the thief was the same,” Capt Chatree said.

Officers at a checkpoint near the Bang Pae Waterfall in Pa Khlok spotted a man matching the description of the thief, but the man noticed the officers’ reaction to his approach and sped off.

“We chased after him and finally found his motorbike dumped in a rubber plantation. We quickly searched the plantation and found him about 15 minutes later,” Capt Chatree said.

Mr Boonserm reportedly confessed to committing 20 snatch thefts in Phuket’s Muang and Thalang Districts in the past two weeks.

“He sold the stuff he stole and spent the money on drugs,” Capt Chatree explained.

“We seized the seven handbags he had on him when we arrested him, as well as two iPhones, a pocket knife and his motorcycle,” he added.

Mr Boonserm was taken to Thalang Police Station for further questioning and was charged for his spate of snatch thefts, Capt Chatree confirmed.