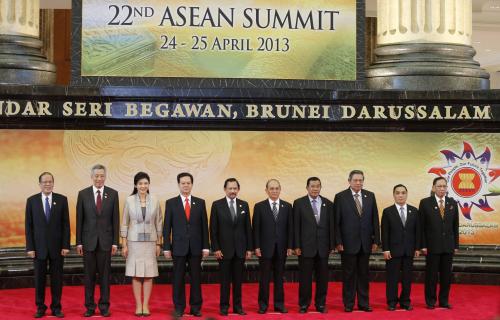 PHUKET: Southeast Asian nations have quietly begun to row back on a deadline of forming an “economic community” by 2015, confirming what many economists and diplomats have suspected for years as the diverse group hits tough obstacles to closer union.

Rather than referring to the end of 2015 as a firm goal, officials at this year’s first summit of leaders of the Association of Southeast Asian Nations (ASEAN), whose 10 members range from glitzy Singapore to impoverished Myanmar, prefer to call it a “milestone” to be built on in years ahead.

In so doing, they are bowing to the reality of slow progress and even some regression on politically sensitive goals, such as eliminating non-tariff barriers and lowering obstacles to the free flow of labor in the diverse region of 600 million people.

While failure to meet the ambitious goal, which was brought forward from 2020 originally, is no surprise, it risks undermining ASEAN’s credibility at a time when it faces unprecedented divisions over maritime disputes with China.

“Essentially ASEAN’s community-building is an ongoing process that will continue even after our 2015 milestones,” Brunei Prime Minister and Sultan Hassanal Bolkiah told a summit-concluding news conference on Thursday.

He acknowledged “challenges due to the varying levels of development amongst us”.

The summit’s final communiqué contained no specific commitment to the 2015 goal, saying that leaders had agreed to “leverage upon ongoing work to establish the AEC”, or ASEAN Economic Community.

The problems raise doubts over whether the group, whose renowned “consensus” approach is designed to protect national interests but also slows decision-making, can bridge yawning economic gaps between richer nations like Malaysia and newer, poorer members such as Myanmar and Laos.

“They are a long way off,” says Jayant Menon, a senior economist at the Asian Development Bank in Manila, referring to the “Mekong” nations of Laos, Cambodia, Myanmar and Vietnam.

Founded in 1967 in the midst of Cold War conflicts, insurgencies and coups in Southeast Asia, ASEAN has become the region’s most successful grouping, credited with preventing strife and promoting a surge in trade and investment.

But critics say it appears to be reaching the limits of its integration unless its decision-making and institutional powers are strengthened. The ASEAN Secretariat in the Indonesian capital, Jakarta, less than 1 percent of the staff numbers at the European Commission, a reflection of governments’ reluctance to cede sovereignty.

“I think nobody will say that,” Philippine President Benigno Aquino told reporters earlier in the oil kingdom of Brunei, where the summit was held this week, when asked if the 2015 goal was now impossible, adding there was much work to be done.

His trade minister, Gregory Domingo, said non-tariff barriers remained the thorniest problem, suggesting that the pace of reform was being dictated by the slowest-moving members.

“We are liberalising on our own, but our liberalisation has to be in sync with others. Otherwise, if we liberalise too fast ahead of others, it will be to our disadvantage.”

Complex and unpredictable import standards in some countries – such as the number of bananas required in a bunch – were holding up the liberalisation of agriculture trade, he said.

Signs that the AEC was not going according to plan emerged last September at a meeting in Cambodia when a top official said its completion may be delayed to the end of 2015 rather than the beginning.

Investors and multinational executives are eager for ASEAN to accelerate its integration to give them better access to a big, youthful population and rapidly growing middle class at a time when Southeast Asia is a rare bright spot in the global economy.

But many voice disappointment that progress in harmonizing regulations has not kept pace with the rhetoric and with businesses’ own efforts to treat Southeast Asia as one market.

“Frankly, today you’re either local or foreign in most countries; there’s no ‘in-between’ when it comes to regulations,” Nazir Razak, the chief executive of Malaysia’s CIMB bank told Reuters in an interview in February. “It’s time we give substance to what ASEAN means, what it means to be ASEAN.”

ASEAN has made strong progress in some areas, reducing nearly all import tariffs among the wealthier six members to zero, for example, as it moves towards its goal of becoming a free-trade zone.

Overall, it says it has implemented 77.5 percent of AEC measures, up from 74.5 percent last October. But economists say the remaining 20 percent or so of steps are the tough ones, and that many agreed by ASEAN still face the hurdle of domestic ratification.

While formal tariffs have come down, other barriers to trade remain formidable, such as government protection for sensitive industries and sectors.

Malaysia, for example, has been reluctant to liberalise auto trade barriers for fear of competition from regional car-manufacturing powerhouse Thailand. The Philippines has kept in place heavy restrictions on foreign investors that critics say are aimed at shielding domestic businesses from competition.

Indonesia, Southeast Asia’s biggest economy, has taken a protectionist turn over the past year by capping foreign ownership of mines and introducing a 20 percent export tax on metal ores in an effort to boost its industry.

Domestic political pressures have limited steps to liberalise worker migration within ASEAN to a handful of professions.

As ASEAN plods along, it risks being overtaken by more nimble moves as Asian countries strike more favorable free-trade deals with countries globally, adding complexity to a so-called noodle soup of regional agreements.

Several ASEAN countries are aiming to join the proposed Trans-Pacific Partnership, which includes the United States.

“This is pulling in different directions,” said the ADB’s Menon. “I don’t know how this is all going to work out.”