PHUKET: Two Phuket burglars thought to have been involved in a series of recent robberies of homes in Thalang have been arrested, police announced today.

The master thief, 26-year-old Saroj Seubsot, and his accomplice Prasert Thothip, 20, were detained after police discovered a large number of items at Mr Saroj’s house that were linked to the robberies.

“Mr Saroj confessed to having robbed many houses throughout Thalang with Mr Prasert as his accomplice,” said Phuket Provincial Police Commander Patchara Boonyasit.

“They were hard to catch because Mr Saroj held on to the items he stole for a long period of time before selling them – making it difficult to identify the stolen goods,” Maj Gen Patchara explained.

Early last month, three foreign neighbors were robbed of cash and valuables amounting to more than 100,000 baht – all on the same night (story here).

The serial thieves struck again a week ago when they robbed two more Thalang homes, relieving the residents of cash and valuables that also amounted to about 100,000 baht (story here)

Gen Patchara said that Thalang resident Saowanee Horebore, 37, whose house was robbed in the second burglary, had already identified several of her belongings from those recovered from Mr Saroj’s house.

“She has been to Thalang Police Station and positively identified a purse and a case for an iPad Mini as being items that belong to her,” said Gen Patchara.

Mr Saroj is thought to be responsible for numerous robberies in the Thalang area dating back to August 2013, when he was caught on CCTV robbing the Democrat Party’s Phuket office (story here).

At the time, a reward of 5,000 baht was offered for any information leading to his arrest, but Mr Saroj managed to allude the police, until this week.

“Police arrested Saroj on suspicion of his involvement in the robbery at the Democrat Party Phuket office,” said Gen Patchara.

“Only then did we discover that the items found in his house included things from the two recent robberies in Thalang, and possibly more from other households.”

Saroj and Prasert were both charged with robbery. They will remain in custody until their court hearing.

“We are now trying to track down those who bought stolen items from Mr Saroj. They will be charged with receiving stolen goods,” Gen Patchara said.

“Anyone who thinks his or her items were stolen by the two offenders should please come to the Thalang Police Station to identify their belongings, so that we can return them to you.” 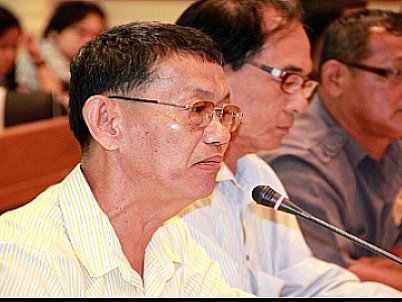