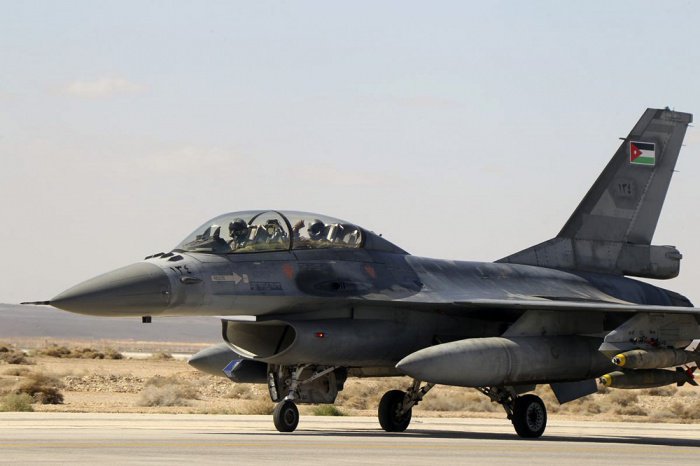 PHUKET: Jordanian fighter jets pounded Islamic State targets in Syria on Thursday, before roaring over the hometown of the pilot killed by the militants while King Abdullah consoled the victim’s family.

A statement from the Jordanian armed forces said tens of jets were deployed in the attacks, which destroyed ammunition depots and training camps run by the Islamic State.

Witnesses overheard the monarch telling the pilot’s father the planes were returning from the militant-held city of Raqqa. A security source told Reuters the strikes hit targets in the eastern province of Deir al-Zor as well as near Raqqa.

The show of force came two days after the ultra-hardline Islamic State released a video showing captured Jordanian pilot Mouath al-Kasaesbeh being burned alive in a cage as masked militants in camouflage uniforms looked on.

“It’s actually the beginning of our retaliation over this horrific and brutal murder of our brave young pilot, but it’s not the beginning of our fight against terrorism and extremism,” Jordan’s Foreign Minister Nasser Judeh said in an interview with CNN later on Thursday.

State television aired footage of fighter jets taking off to carry out the raids. It later broadcast footage of the actual bombing before the jets returned safely to Jordan.

Several men and women were shown writing Koranic verses and anti-Islamic State slogans on what appeared to be the bombs used in the attacks.

“We’re going after them with everything that we have,” Judeh said.

The official also said the strikes focused on multiple targets around Raqqa.

Military commanders briefed King Abdullah after the missions about the details of the strikes, state television said. The monarch has vowed to avenge Kasaesbeh’s killing and ordered commanders to prepare for a stepped-up military role in the U.S.-led coalition against the group.

But many Jordanians fear being dragged into a conflict that could trigger a backlash by hardline militants inside the kingdom.

Jordan is a major U.S. ally in the fight against militant Islamist groups, and hosted U.S. troops during operations that led to the invasion of Iraq in 2003.

The country is also home to hundreds of U.S. military trainers bolstering defences at the Syrian and Iraqi borders and is determined to keep the jihadists in Syria away from its frontiers.

State television showed a sombre King Abdullah sitting alongside the army chief and senior officials while visiting the Kasaesbeh tribal family in Aya, a village some 100 km (60 miles) south of the capital, Amman.

The king, wearing a traditional Arab headdress, was met by cheering crowds with cries of “Long live his majesty the king, long live the king,” in traditional Bedouin chanting.

Thousands of Jordanians flocked to pay their respects. The region’s influential tribes form an important pillar of support for the Hashemite monarchy and supply the army and security forces with manpower.

“You are a wise monarch. These criminals violated the rules of war in Islam and they have no humanity. Even humanity disowns them,” Safi Kasaesbeh, father of the pilot, told the king.

The Jordanian monarch has vowed that the pilot’s death, which has stirred nationalist fervour across the country, will bring severe retaliation against Islamic State.

Hours after the release of the video showing the pilot burning to death, the authorities executed two al Qaeda militants who had been imprisoned on death row, including a woman who had tried to blow herself up in a suicide bombing and whose release had been demanded by Islamic State.