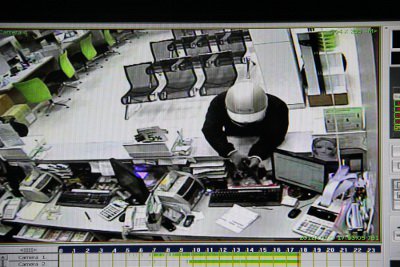 PHUKET: Phuket City Police are scouring the streets of Phuket for a man who robbed a Kasikorn Bank branch at gunpoint, making off with 694,000 baht in less than a minute:

Police were alerted to the robbery, at the Tesco Lotus Chaofa shopping complex in Wichit, at 6:15pm this evening.

“There were a only a few customers waiting in the queue. Then this man, wearing a helmet and covering his nose and mouth, came running inside the bank, straight into the manager’s office,” said one teller at the bank.

The man was wearing a black leather jacket and jeans, she said.

“When he saw nobody in the office, he looked at us and threatened us with a gun, telling us to put money in his bag. He said, ‘Only 1,000 baht notes’,” the teller added.

Looking to keep the situation calm, Boonlert Chaitaweesub, assistant manager at the branch, pleaded with the robber, “Please don’t hurt anyone”, another teller said.

“The robber took about one minute to rob the bank. From the three counters open, he got about 694,000 baht in total, then he sped off on a motorcycle with no license plates,” Mr Boonlert said.

Police Deputy Superintendent Chaiwat Auykham told the Phuket Gazette, “We have checked every CCTV camera in the area and we now know where the robber was heading to.”

He declined to give any further details at this time.

PHUKET VIOLENCE: Three ways to knock it back