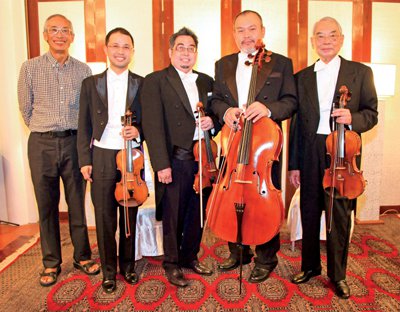 PHUKET: There is good news for those who appreciate European classical music: Mom Luang Tri Devakul is again welcoming Phuket residents and visitors to his luxury estate at Villa Royale tonight for an evening of music and fine dining.

Mom Tri has long supported the arts on the island with his Baan Kata Artsfest, a celebration of music, art and fine cuisine. For 2012, he has invited Mom Luang Usni Pramoj and his ensemble to entertain his guests with an evening of Dvorak accompanied by an original composition.

Joining ML Usni will be the Concert Master of the Bangkok Symphony Orchestra, Tasana Nagavajara, who trained at the International Menuhin Music Academy and has performed a series of concerts at the Mendelssohn House in Leipzig.

Also performing at the event will be Siripong Tiptan, who recently played in concerts at the Vienna Musikverein and at Rotterdam’s De Doelen hall, and Kittikhun Sodprasert, a talented composer and arranger of music who serves as principal cellist for the Bangkok Symphony.

He graduated from Oxford University with a law degree but has had a lifetime love of conducting and creating original music. ML Usni plays the violin and was named National Artist in 1994 for his musical talents. He was also instrumental in the development of the Bangkok Symphony.

He has set up a tour of Thailand with his ensemble and will perform today at Mom Tri’s Villa Royale. Local arts activist Dan Miles, best known for his talents as a celebrity photographer, has been recording ML Usni’s ensemble and is currently planning to produce a video of his musical career.

“ML Usni Pramoj is one of the most talented men I have met in Thailand. He is committed to educating Thai students in the beauty of Western classical music. We are working on a project which will allow the ensemble to return frequently to the island and perform in the local schools,” said Mr Miles.

There is a cocktail reception starting at 6pm, with the concert starting at 7pm. For ticket information, contact Sylvie Yaffe at Mom Tri’s Villa Royale (076-333569).

In addition to the concert, Mom Tri’s Kitchen is presenting a special four-course menu for the occasion to round out the evening of culture.

Tomorrow there will be another concert held at the Prince of Songkhla University, Phuket Campus (Luang Anuphas Phuket-karn Auditorium) starting at 7pm.

This concert is open to students from all schools around Phuket island and admission is free to students and parents, thanks to the generous sponsorship of Brian Woulfe (Designed by Woulfe Studio, Phuket) and Blair Speers (HotelTravel.com).

Phuket Gardening: Dangers in the Garden of Eden