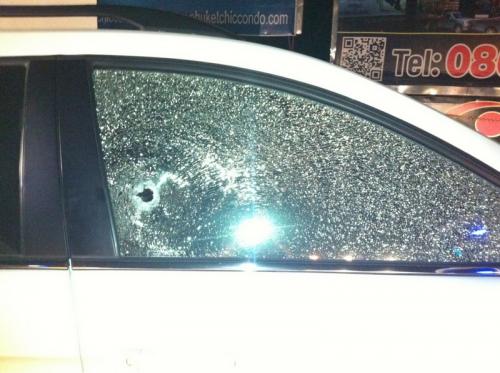 PHUKET: Phuket Police have sent CCTV footage related to the murder of Jintana Mahattanapak to experts in Bangkok in the hopes they can extract fresh information that will lead to the arrest of her killers.

Mrs Jintana, the human resources director at the Hilton Arcadia Phuket Resort & Spa in Karon and mother to two young daughters, was executed by a single gunshot to the head while driving home from work on January 18.

Speaking exclusively with the Phuket Gazette, Phuket Provincial Police Deputy Commander Arun Kaewvatee, the officer in charge of the murder investigation, yesterday revealed how few leads police have in catching the killers.

Col Arun said that, in contrast to earlier reports, police do not have accurate descriptions of the two men believed to be the killers. The two men were filmed by CCTV cameras following Mrs Jintana’s car by motorbike on her way home from the Hilton Phuket in Karon (story here).

“Police have footage from several CCTV cameras, but we could not determine any distinguishing details of what they were wearing, or the color or design of their helmets,” Col Arun said.

Police do not even have a description of the make and model of the motorbike they were riding.

“The CCTV footage we have is not good enough quality. That is why we had to send it to experts [in Bangkok] to identify either the killers or what kind of motorbike they were riding,” Col Arun said.

“We are still waiting for the results, and we do not know when they will be sent back to us. However, once police have enough evidence to issue arrest warrants, we will be able to tell the press a lot more,” he added.

CCTV footage police are examining now show that, contrary to earlier reports, Mrs Jintana’s car did not stop at the traffic lights where she was murdered, as previously believed (story here).

Col Arun was able to confirm that Mrs Jintana was killed by a close-range shotgun blast through the driver’s side window of her car.

“Traces of the shotgun cartridge were found on the body. Also, police obtained fingerprints from the investigation, but we have yet to match those with possible suspects,” he said.

However, Col Arun declined to reveal where the fingerprint samples were collected.

He also did not elaborate on whether or not police believe Mrs Jintana was murdered over a conflict at work (story here).

The news that the police hunt for Mrs Jintana’s killers has stalled comes as Pheu Thai MP and Government Spokesman Prompong Nopparit and Royal Thai Police Department of Special investigations (DSI) chief Tharit Pengdit arrive in Phuket today to inspect why police accommodations being built on the island are behind schedule.