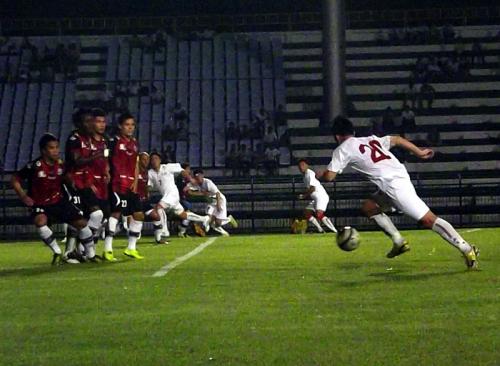 PHUKET:Despite fielding six high-quality foreign players in their starting line-up, Phuket FC were not able to gain an advantage over their North Korean opponents, 4.25 Sports Club, who walked away 0-1 winners in a friendly match in Phuket Town last night.

A late second half goal by skilled North Korean international, Kim Kum Il, was enough for the 13-time DPK Korean league champions to prevail in the match, played in front of about 2,000 fans at Surakul Stadium.

It was clear from the opening to closing whistles that 4.25 were the more fit and better coordinated team; though rapidly improving, the new-look Phuket FC, are still learning to play with each other ahead of the official kick-off of the 2013 season, set to commence in early March.

Despite several chances, the Southern Sea Warriors weren’t able to find the back of the net.

After the match, Giorgi told the Gazette: “We had several chances, but no goals. They had fewer chances, but got the goal. That’s football.”

Dudu also commented: “The Koreans were a very strong team, with exceptional teamwork. They were able to execute combination plays a lot quicker than us, but we’re getting better by the day. We will continue to work hard…”

Phuket are planning for at least three more friendly matches this month, the next scheduled for this Sunday against Division 2 side, Surat Thani FC.

Kickoff for the match is tentatively scheduled for 4:30pm. More details will be announced as information becomes available.