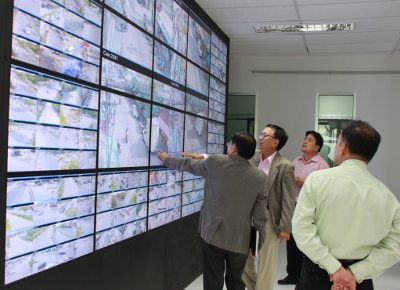 PHUKET: Phuket Provincial Police Commander Chonasit Wattanavrangkul this morning revealed plans to ask the central government to fund a project that will see all CCTV cameras across Phuket feed live footage into a single server.

“We are now working on a CCTV project to improve public safety in Phuket by having all CCTV on the island connected to the same server. Once done, we will present it to the Phuket provincial government,” he said.

Maj Gen Chonasit explained that CCTV could alleviate the decade-old problem of not enough police officers being assigned to Phuket.

“We will set more checkpoints and assign officers from the Phuket Provincial Police to join local police efforts, but the number of police officers in Phuket is based on its registered population.

“Phuket has only three [administrative] districts and the number of residents registered as living here does not match the actual number of people living here. That is why we need more officers,” he explained.

Maj Gen Chonasit went on to point out that he did not expect the CCTV project to cost much.

“We will not ask [the central government] for a big budget for this project because we will use the thousands of CCTV cameras that have already been installed in Phuket, by both government offices and private businesses,” he said.

One problem that will need addressing is the high number of defunct CCTV cameras that need repair.

“We have found that many CCTV cameras are not working. We will encourage the persons in charge to inspect and fix their cameras so we can connect them all to a server so everyone can view the footage and be part of an integrated public safety campaign,” Maj Gen Chonasit said.

Phuket Governor Tri Augkaradacha asked for the plan to be developed quickly so it could be presented to deputy national police chief Gen Pansiri Prapawat when he visits Phuket this Wednesday (July 4).

In revealing his plan, Maj Gen Chonasit did not elaborate on whether or not the project included making use of the Phuket Provincial Administration Organization (OrBorJor) CCTV control room at the OrBorJor hospital in Rassada.

He also did not make any reference to the call by OrBorJor President Paiboon Upatising just last month for the central government to provide 2 billion baht to interconnect 10,000 CCTV cameras in Phuket.