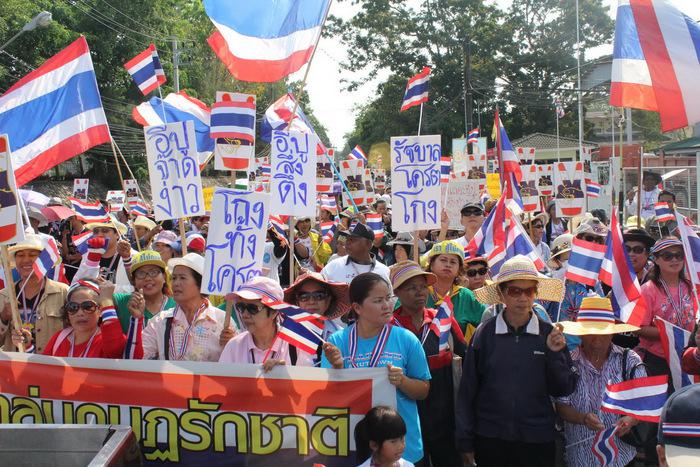 PHUKET: The two factions of the People’s Democratic Reform Committee (PDRC) anti-government protesters in Phuket united today to march through Phuket Town and stage a motorcade along Phuket’s west coast.

The Krabot Rak Chart faction led by former Rassada Mayor Suratin Lian-udom massed in front of the Phuket Revenue Office on Narisorn Road, before joining fellow PDRC supporters led by Amnuay Kumban and Theerawut Sritularak in front of Phuket Provincial Hall at 9am.

“Although we are divided in our opinions of how the protests should continue [story here], we are united in that we want to show the government how many Phuket residents do not want them to be in power anymore,” he told the Phuket Gazette.

This afternoon, the protesters will mount vehicles to stage a motorcade that will parade through Kathu, Patong, Kalim, Kamala, Cherng Talay, Thalang then return southbound along Thepkrasattri Road to Provincial Hall in Phuket Town.

The protests in Phuket today coincide with mass rallies in Bangkok led by PDRC leader Suthep Thaugsuban, who is calling for national reforms before another election is held (story here).