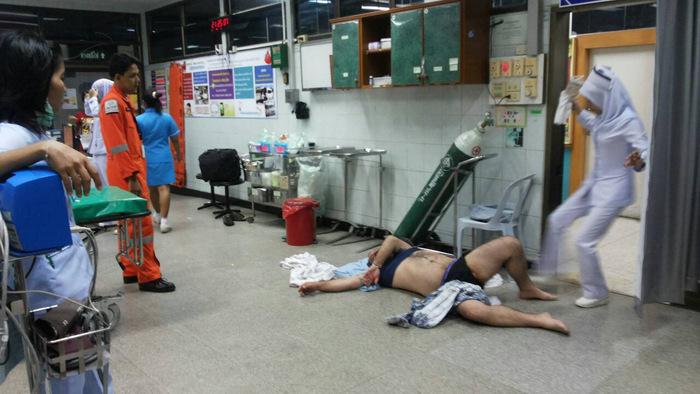 PHUKET: An Australian man who passed out drunk during his flight to Phuket was carried off the plane still unconscious on arrival yesterday and rushed to Thalang Hospital.

The man, named by police as Christopher Lazarus Boubis, 39, later regained consciousness in the emergency ward at the hospital, but immediately went on a rampage through the facility.

“He was shouting and verbally abusing staff, scaring them, before he collapsed again unconscious in an emergency treatment room,” a nurse told the Phuket Gazette.

One nurse said that as Mr Boubis woke, he seemed dazed and confused.

“He even groped one of the female staff,” she said.

Officers from the Thalang Police arrived soon after to take Mr Boubis into custody.

“The man’s flight landed at about 9pm last night. We brought him to Thalang Police Station as soon as doctors said it was safe to do so,” Lt Chatree Chuwichian explained.

“He was escorted by police to his hotel in Patong,” Lt Chatree said. “No charges were brought against him as no complaints were filed against him and there was no damage to any property.”

However, Lt Chatree urged tourists to be more responsible while on holiday.

“We understand people come here to have a good time, but please be careful about how much alcohol you drink. If you get too drunk, you could easily harm yourself or others,” he said.