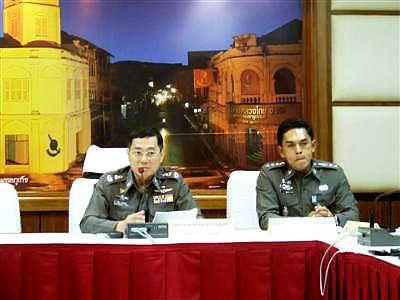 PHUKET CITY: After analyzing DNA evidence, police on Monday arrested a cashier at Phuket FantaSea for the theft of more than two million baht’s worth of diamond jewelry from the souvenir shop safe in May.

Police said a sample of 26-year-old Khuanrue-thai Chartnarong’s hair matched those found near the safe shortly after the robbery, which took place at Phuket FantaSea in Kamala on May 23.

Investigators found fingerprints on the safe and hair nearby, he said.

Police collected hair samples from 940 people and used DNA analysis as part of the investigation, he said.

Ms Khuanrue-thai denied committing the robbery when police interrogated her after her arrest on Monday, Gen Pekad said.

Police were awaiting results of fingerprint tests for further evidence against Ms Khuanrue-thai, he said.

“Last May it was Ms Khuanrue-thai’s shift as cashier,” he added.

Phuket Fantasea opened at Kamala Beach in 1998 and has won numerous tourism industry awards as a top attraction.

Phuket Open: All Thai teams out