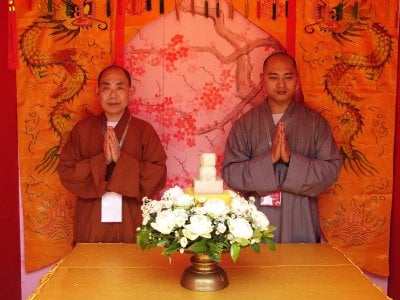 PHUKET: The 12th-annual Phuket Old Town Festival kicks off at 7pm tonight, offering a wide range of performances, food and fun activities along Thalang Road and at Queen Sirikit Park.

Coming less than a week after the arrival of the Year of the Rabbit, one of the highlights of this year’s events is two objects related to reverence of the bodhisattava Guan Yin, now on display at Queen Sirikit Park.

The first is a hand-carved, white jade replica of a 1,000-year-old stamp from Guangde Shrine in the Chinese province of Szechuan, considered by many the birthplace of Guan Yin. The lion-shaped piece sits atop a floral array in the park.

Not far away is a statue of Guan Yin from the Pud Jor Chinese Shrine in Phuket Town.

The images went on display this morning during a religious ceremony conducted by two Chinese monks from Guangde Shrine.

Phuket people, many of whom are of ethnic Chinese descent, are expected to pay reverence to the objects and ask for good luck in the new year.

After the festival ends on Thursday night, the jade stamp will be on permanent display at Pud Jor Shrine.

Phuket City Mayor Somjai Suwansupapana said, “We are very lucky to have received this seal. I visited the temple when I went to Suining to ask that their performers take part in our festival.

“I was told that Suining people and monks of this temple worship the Chinese goddess Guan Yin, just as Phuket people do. So we agreed to sign a memorandum of understanding, becoming sister cities. The Abbot of Guangde Shrine then presented us this seal as a gift,” she said