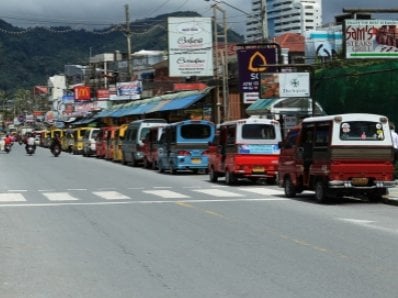 PHUKET: A maximum fare of 200 baht has been set for any tuk-tuk or taxi ride within Patong, a Phuket provincial committee confirmed today.

The committee was tasked to address problems associated with tuk-tuk drivers overcharging customers.

Members held a meeting at Provincial Hall today to reach a final agreement on the fares, which are now set to be standard for tuk-tuk and taxi journeys both within and from Patong to different areas of Phuket.

The new fares will come into effect as soon as Phuket Governor Tri Augkaradacha signs an official announcement.

The maximum fares for taxi rides within Patong will be 200 baht for up to four passengers and a maximum extra charge of 50 baht per passenger exceeding four, as reported by the Phuket Gazette last month.

In its first stage, the standard fares will be used by all taxis in the Patong Taxi Federation, the committee said.

“These are the fares that drivers normally charge tourists – we’ve just made them standard and professional,” said Phuket Vice Governor Weerawat Janpen.

“At first, some drivers may have problems following this announcement, but I believe that in the end everyone will adhere to these fares.

“This action creates a good image for Patong,” he added.

The standard fares will be published in the form of official signboards and leaflets will be handed out in Patong.

For a comprehensive listing of the fares agreed to today, pick up a copy of the Phuket Gazette due out this Friday afternoon.