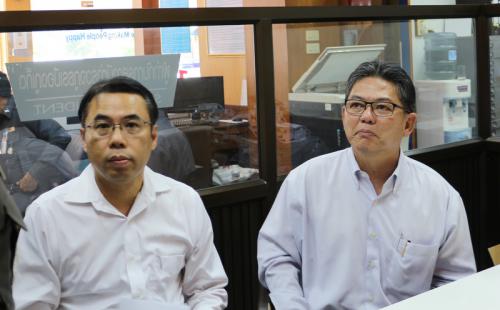 PHUKET: Two police complaints were filed yesterday after protesters once again blocked access to the Phuket Community Center, preventing a candidate from enrolling for the February 2 national elections.

Pheu Thai candidate Visit Jaiart was prevented from entering the building to submit his candidacy.

“I arrived to register at 8:30am, but protesters were blocking the doors and had taped flags over them to prevent people from getting in,” Mr Visit said. “I was afraid to enter the building because I thought that the protesters might attack me, so I went to the police station to file a complaint.”

The Director of the Phuket Election Commission (PEC) also filed a police complaint because he was unable to enter the building to fulfill his duties.

“I arrived at the building with PEC officers at 8am, but we couldn’t get in because of the protesters. They were blocking all the doors,” said Phuket Election Commission (PEC) Director Kittipong Thiengkunakrit.

“I notified the Election Commission of Thailand in Bangkok and filed a report with the police,” he said

Protesters also blocked access to the hall on Saturday, the first day of candidate enrollment (story here). However, the mass of protesters did not block access on Sunday, and one candidate was able to enter the building and formally register for the election (story here).

“Everybody has the right to think differently, but we should all respect the thoughts and freedoms of others,” said Mr Visit. “I want to have the chance to enroll as a candidate in this election.”