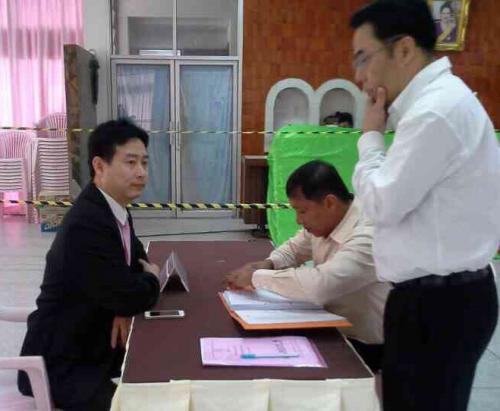 PHUKET: One lone candidate yesterday braved the hundreds-strong protest in front of the Community Hall in Phuket Town to register in the February 2 national election.

Jirayus Songyos registered as a Pheu Thai candidate for Voting District 2, which encompasses Phuket Town and the south of the island (click here).

“So far, he is the only candidate registered to contest a seat in the February 2 election,” confirmed Phuket Election Commission (PEC) Director Kittipong Thiengkunakrit.

Mr Jirayus, 42, is a former consultant to Phuket Provincial Administration Organization (PPAO) President Paiboon Upatising. In 2011, he contested District 2 as a candidate for the Bhumjaithai Party (story here).

Yesterday, he arrived at the Community Hall (map here) at about 8:30am and was escorted into the building by an entourage of about 20 people.

As he walked through the crowd, the protesters blew their whistles loudly, but did not block his path. In contrast, just a day earlier, the protesters blocked all access to the center, forcing the PEC to close the first day of candidate registration early (story here).

After formally registering his candidacy, Mr Jirayus left the center, again without incident. He declined to comment to the media or talk with protesters.

Meanwhile, protest leader Suratin Lian-udom, the former Mayor of Rassada, repeated: “The protesters in Bangkok must succeed in the formation of the People’s Council before any elections are held.”

“We were unaware that Mr Jirayus was coming to register for the election. Regardless, that is his right,” PEC Director Kittipong told the Phuket Gazette.

“We have yet to be informed whether or not a candidate will be coming to register for Phuket Voting District 1,” he added.

Mr Kittipong confirmed that the two officials nominated to administer the polls in each of Phuket’s two electorates have resigned.

“Tawatchai Thongmung of District 1 and Somjit Limpattanawong of District 2 resigned their positions at 9am yesterday,” Mr Kittipong noted.

“Regardless, candidates can continue to register as usual. Registration will close on January 1,” he added.