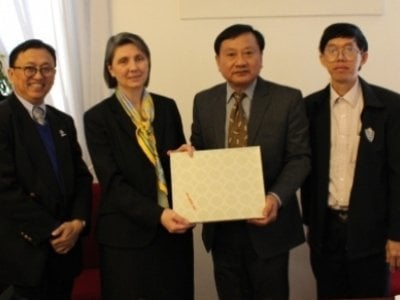 The tour of the parliament building followed a request by Phuket Provincial Organization Administration (OrBorJor) President Paiboon Upatising, who is leading the delegation jointly with Phuket Governor Tri Augkaradacha.

The group toured the Chamber of Deputies meeting room, the Czech equivalent of the Thai Cabinet meeting room, as well as meeting rooms where leaders of local government bodies meet with their counterparts at the national level.

After that, six members of the delegation met Czech Deputy Environment Minister Rut Bizkova, who gave a presentation on wastewater and trash management issues.

The Czech Republic put more attention on environmental protection after the country introduced a democratic form of government in 1990.

Since that time pollution has been reduced by about a third overall, the delegation was told.

OrBorJor President Paiboon said he was very impressed with the tour, especially the meeting rooms to facilitate the exchange of ideas between local and national leaders.

“The Parliament here pays great attention to the work of local administrations. Leaders of local bodies have a chance to meet Chamber members three or four times a year in these rooms, where they can directly voice their concerns and make requests. I would like to have this system in Thailand. In the Czech Republic, there are over 6,000 local administration organizations,” he said.

The group’s itinerary for today includes a tour of a wastewater treatment plant in Dresden, Germany, followed by a 200-kilometer coach ride to Berlin, where the ITB will take place.

Phuket Gazette reporter Pimwara Choksakulpan is traveling with the delegation and filing daily reports with the Gazette News Desk.

Confessed Phuket murderer Fanelli on the inside