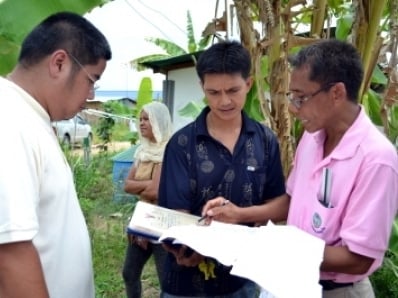 PHUKET: The hasty construction of a handful of shelters and houses on an undeveloped plot north of Phuket Town has sparked a full investigation by the Phuket Land Office into who legally owns the land.

The issue came to a flash-point on February 22 when Pasinpon Sabtamrongkan arrived at the site to find about 40 local residents – and a hastily built fence – stopping him from accessing land registered as owned by his wife, Methinee Janpong.

“They told me the land belongs to them… It’s my land, I can enter whenever I want, but the people said I was not allowed in and threatened to hurt me,” he said.

Contention over the land, just south of the Bang Khu Intersection in Sapam, began two months ago.

“I came here and found people [literally] building houses and shelters on the land. I told them to leave but they just kept on building,” Mr Pasinpon explained.

“I hired a man called ‘Nuad’ to stay in a house on our land and to cut the grass and weeds. But people started encroaching onto our land after he left about six months ago,” he added.

After discovering three houses, some shelters and a brick wall had been built on his land – along with newly planted banana and coconut trees and wire fences marking off different areas – Mr Pasinpon asked the Land Office to investigate.

“Tanit Janpong, my father-in-law, bought the 24 rai from Suchart Khaisil, who was the original owner in 1979,” Mr Pasinpon explained.

“The whole plot used to be empty and later [Suchart] subdivided it to sell the smaller plots cheaply – from 20,000 to 40,000 baht each. Most of the land buyers were government officers,” he added.

“My wife bought the remaining land from her father eight years ago,” he said, adding that each plot was about 80 to 90 wah, covering “four to five rai” in total.

“Dr Prasong Sangkhachai, my father-in-law, owns our plot of 87 wah. He bought it from Tanit Janpong. The Chanote was issued in 1989,” he said.

“We may have to talk and negotiate with them first because they may not know, but this is a warning to let them know: If the buildings stay, I will pull them down myself,” Col Jaran said.

Arriving at the site that morning was Nikom Ukati and a team of fellow surveyors from the Phuket Land Office.

“When we arrived, some people were ‘opposed’ to us measuring the land. But we explained the problem to them and they let us continue our work,” he said.

“I am here to measure the four plots of land [that Mr Pasinpon claims his wife owns] and to confirm the plot areas by identifying the boundary markers. In total, 25 plots are to be investigated,” he explained.

“At this time, I have yet to see any Chanote titles presented by people who have built houses and shelters here.”

After returning to the site on March 1, Mr Nikom told the Phuket Gazette that none of the people who occupy the recently-built houses and shelters claimed to have Chanote titles for the land they were now living on.

“This is public land. Anyone can build here,” he told the Gazette.

Asked if he lived in the area or owned any of the houses in question, Mr Worrawit said he was “just a friend of someone here” and that he was “just here to help”.

Yet Mr Nikom denied any of the land was state land.

“None of the land here is public land. From the evidence I have so far, the land is privately owned,” he said.

Despite documentary evidence already confirming the ownership of the 25 plots, his team would continue measuring each and every plot – as requested, he added.

Most likely his team will complete the investigation by the end of March, Mr Nikom said on March 1.

Adding to the mix of complaints, Jamroen Pin-amorn told the Gazette, “I own 13 rai here. I did not buy it from [former gardening caretaker] Nuad, but I believe he sold land to other people.”

Mr Jamroen then showed the Gazette two very basic documents that he said proved he had full ownership rights to his land.

“This document was issued by the Royal Forest Department in 1979,” Mr Jamroen said.

Mr Pasinporn expressed his good faith in Mr Nuad, but he also had some doubt.

“I do not believe he sold my land, but we need to find him and ask him whether he did or not.

“But I think it would be quite difficult to find him now,” he added.