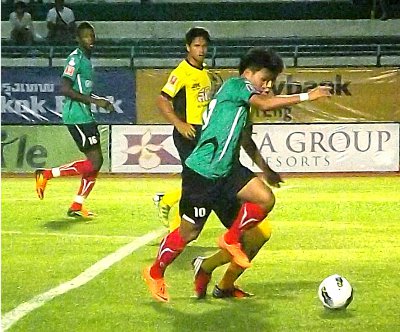 PHUKET: Seven of at least nine goals netted were allowed in Phuket FC’s survival match last night against the Khon Kaen FC T-Rex, with the Islanders earning a convincing three points at home by a 5-2 scoreline.

Played at Surakul Stadium in Phuket Town, the midweek match was played in front of a humble crowd of 2,100.

Languishing in 15th place of the 18-team league, Phuket were desperate for critical points going into their final four games – and their 13th-placed opponents, in a similar “sink or float” relegation fight, were not to be taken lightly.

The Islander’s previous three losing results – to Saraburi, Sri Racha and Suphanburi – seemed to have served their lesson-teaching purposes, however.

In the opening minutes, Thawin Butsombat drove deep right, sending a pass into the penalty box, where it was deflected out by a Khon Kaen defender.

Stepping up to the opportunity, Phuket’s Korean import Boas Chun followed up and with striking precision sent his grounded shot through to goal, livening up the crowd his second for the team.

Nirun Panthong netted the second goal in the 21st minute, his first of the season, capitalizing on a beautiful evasive pass to the far post from Makalou “Kanoute” Ibrahim.

The third goal came from a corner kick in the 37th minute, with Narakorn Wisetthanakarn diverting his single-touch shot inside the far post.

Thawin scored his first goal of the match two minutes later on a breakaway, finished by a perfectly timed shot to the near post to put the home side up 4-0 going into halftime.

At the start of the second half, all the first-half momentum seemed to remain with the home side, who were awarded a penalty within the first 10 minutes after Thawin was taken down inside the box.

His subsequent spot kick hit its mark as he and fans celebrated the striker’s third goal of the season.

Down 5-0, Khon Kaen finally managed to garner a response 10 minutes later with Supot Jodjum sending the ball into the box, where Argentine power forward Matias Reciohis finished beautifully with a diving header, his seventh goal of the season.

Late in the game, Matias helped his side score their second, heading a floating cross from Saksit Yuencheewit, diverting the ball to teammate Charin Boonhad in the box, who finished nicely for his fourth of the season.

The score remained 5-2 to the final whistle, but players and fans could attest that the deficit could have, should have, been wider, had offside flags not disallowed two otherwise perfectly good goals.

For his outstanding play, Thawin Butsombat was awarded the honors of Man of the Match.

The result sees Phuket climb just out of the relegation zone, into 13th place, with Khon Kaen swapping places, down into 15th place.

However, Phuket’s celebrations will have to be cut short, as their campaign for survival is far from over.

With minimal time to recover, the Islanders are now set to hit the road to take on second-placed Bangkok United on Saturday.

Phuket will remain in the Central region to prepare for their next game a week later (October 20), away to Rajpracha, also fighting for Division 1 survival.

Phuket then return home for the season finale against JW Rangsit, yet another side looking to escape relegation.

Kickoff for the final match on October 27 will be at 4pm.