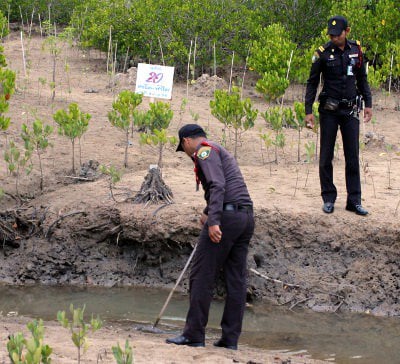 PHUKET: The bloated carcass of a monitor lizard was hastily retrieved from a swamp at Klong Koh Pee in Phuket on Monday, just moments before the arrival of Thai premier Yingluck Shinawatra, it can now be revealed.

Prime Minister Yingluck and her entourage were scheduled to arrive at the Saphan Hin side of the proposed Klong Koh Pee elevated road project site at about 3pm.

After more than 15 years of waiting, local officials and staff at the nearby Chalermprakiat School were prepared to present the project to PM Yingluck in the best possible light.

They prepared a large sign welcoming her to the area, replete with computer-generated images of how the elevated road would span the mangroves below, turning their daily commute from a time-consuming grind to little more than a walk through – or over – the park.

As the crowd jostled for camera position with the PM’s appearance imminent, one reporter noticed something floating in the nearby mangrove swamp not far from the welcome sign: the belly-up carcass of a monitor lizard, a creature held in such low regard by Thais that its name hia is not uttered in polite society.

A widespread belief among Thais is that the sight of a monitor lizard is a harbinger of bad luck to any and all unfortunate enough to view one.

When spoken reference to the creature cannot be avoided, it is often referred to by the more euphonious name tua ngen tua thong (gold and silver creature) in order to avoid a jinx.

Thus, the presence of the bloated carcass just behind a stage the PM was about to stand on sparked considerable commotion and shock among the crowd.

Phuket City Municipality officers were called in to remove the dead lizard, which people estimated to have died at least a day before.

They managed to complete the task just moments before PM Yingluck and her entourage arrived.

PM Yingluck, who never viewed the lifeless lizard, approved 200 million baht in funding for the project the following morning.