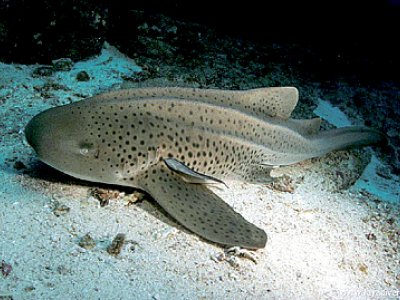 PHUKET: There was a sinking feeling in my stomach as Raya’s dive boat approached Hin Musang, better known as Shark Point. Casually floating not more than a kilometer away from our splash-in point were two ragged-looking commercial fishing boats. Rumors and grumbles that Shark Point’s namesake sighting, leopard sharks, were becoming a rarity began to take on some merit.

Because of their unique and prominent large black spots, as well as their hardiness, leopard sharks are a favorite for private and commercial aquariums. Not only are they sought by aquarium enthusiasts, they are also caught for food, a popular dish by all accounts. Sadly, some Phuket divers have claimed to see leopard sharks on board fishing boats around Shark Point.

Leopard sharks tend to remain within particular areas, rarely undertaking long journeys to other suitable habitats, which makes the rumors of their declining presence at Shark Point all the more unsettling.

However, like all dive trips, there are no guarantees of what you are going to see once underwater. A little nervously, my group jumps first and quickly descends onto one of the three major pinnacles of Shark Point.

I feel like Alice in Wonderland. Shark Point is everything a tropical dive site should be – a total wonderland of marine life. The “need” to see a leopard shark begins to evaporate as giant gorgonian seafans gently wave in the current, beckoning us around the decorated limestone pinnacle, which rises out of the sandy seafloor like a petrified Christmas tree.

Following our Raya divemaster we peek into the bowl of a rusty-red giant barrel sponge. Motionless at the bottom was a gnarly scorpion fish, not the only master of disguise that we bumped into on the dive.

Curious about every nook and cranny of the reef, I float less than a meter above the sea floor. The desire to see a leopard shark is completely washed away by the beauty of the site.

Time, like air, goes fast when you’re having fun, so in what felt like no time we were due for a safety-stop.

We stop in a forest of pink soft corals, atop of one of the pinnacles. While waiting, we start a search of the brilliantly colored corals for seahorses, but our three minutes quickly expires and we are forced to surface.

Back on board there is a twinge of jealousy as the other dive group starts talking about the two-meter leopard shark they spotted. However, the condolence package wasn’t so bad and the silver lining of course is that Shark Point still has its namesake, even if they are a bit more rare this high season.

If you have general questions about scuba diving or freediving in the Greater Phuket region, you can contact me anytime at Isaac@PhuketGazette.net.