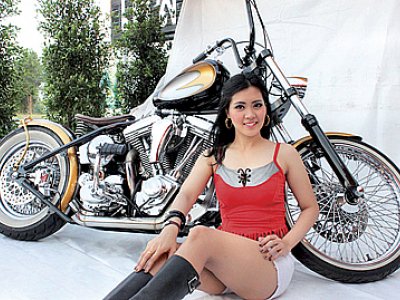 PHUKET: There are places in the world where the roar of big bikes coming towards town spells trouble, but here in Phuket that sound heralds good news as it means that Big Bike Week is here again and that business is as booming as the engines.

Heading into its 18th year, the event will take place between April 6 to 8, just before the Songkran festival kicks off and, like the bikes themselves, has become bigger and better each year.

Back in 1995 the Phuket Riders Club and the Immortals Thailand Club decided to organize a group ride with motorcycle riders from Bangkok and tourists from Malaysia, Singapore and the USA.

That original ride involved around 150 big bikes with about 300 visitors and has grown over the years.

Organizers of Phuket Bike Week 2012 believe this year’s event will attract well over 6,000 big bikes to the island, and along with the annual Songkran Festival, inject at least 600 million baht into the economy. This year they have the added support of many Phuket officials and the festival is being organized collectively by Phuket Province, Patong Municipality, the Phuket Big Bike Club, the Phuket Riders Club and Ride Thailand magazine.

Boasting 450 members, Phuket has 36 motorcycle clubs in all with the Phuket Riders Club being the largest with 24 members.

The aim once again is to attract some 30,000 big-bike lovers from across Thailand and the world to visit Phuket and spread the word about South East Asias largest motorcycle event.

Indeed, with Thailand preparing to join the Asean Economic Community (AEC) initiative in 2015, this year’s theme is ‘Asean Ride Together’ as many bikers come across the borders, especially from nearby Singapore and Malaysia.

The organizers of Phuket Bike Week also recently attended a press conference in Jakarta to encourage more bikers from Indonesia to the event.

“Last year about 200 participants came from Indonesia and we hope to raise that number to around 500 this year.” said Wittaya “Sumon” Singkalah who is the coordinator of Phuket Bike Week 2012.

As with previous years, Big Bike Week 2012 has a number of entertaining events to keep the bikers happy both on and off their machines such as a Miss Phuket Bike Week competition, a tattoo and custom bike show, a motorbike exhibition, a ride for peace and global warming, a sand castle art contest, beach parties and a music festival at the new specially prepared area at Loma Park on Patong Beach.

The beach party and music festival will feature some top local and some overseas artists including Carabao and Baowee.

The event attracts television coverage here both in Thailand and overseas and is supported by companies such as Harley Davidson, who have more than 300 community members in Thailand alone.

“It is a great opportunity to showcase Phuket and we are still seeking sponsors to help support this huge event, Any local businesses that want to get involved are still welcome to join” said Sumon.

Meanwhile Phuket’s population will be able to view the awesome sight of hundreds of dedicated bikers on their gleaming machines rumbling around the island and planting banana trees along Patong Beach to reduce their own carbon footprint.

Sumon points out that the sort of participants that attend are usually responsible and safe riders and that the event has little to do with infamous bike gangs that people fear.
“We discourage some disreputable gangs from joining as we aim to create better relationships between bikers of all nationalities while creating awareness of Phuket’s culture and traditions. We also use this event to promote Phuket as a tourist destination for bikers,” he said.

Readers who are into bike bikes, tattoos, biker babes or top-class live music should not miss this opportunity to see, or be seen at, one of the most spectacular events on the island.

Phuket Bike Week 2012 is sponsored by the Phuket Gazette and PGTV.