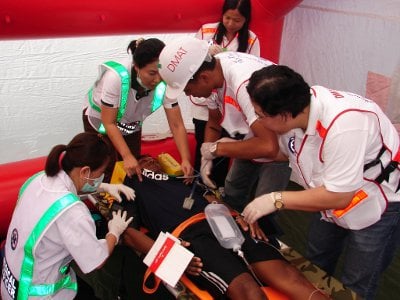 The PPHO organized the advanced four-day intensive training in coordination with the Emergency Medical Institute of Thailand (EMIT) and the Japan International Cooperation Agency (JICA), he added.

During the training, DMAT teams will learn firsthand from JICA’s Dr Hayashi how Japanese DMAT teams responded to the earthquake and ensuing tsunami disaster that struck the island of Honshu in April this year.

The Thai DMAT teams will then pit their skills against DMAT teams from Japan, Korea and Sri Lanka in the International Medical Rally at Nai Yang.

“There will be 10 teams, with five people in each, in the competition,” a PPHO officer explained to the Gazette.

“Seven of the teams will be from Thailand and the others, from Japan, Korea and Sri Lanka, will arrive on December 22 to take part in the competition. They are all expert in disaster-response skills,” she said.

“Ten stations will be set up in Sirinart National Park where the teams will have to respond to simulated emergencies, such as assisting in delivering a baby, responding to a mass accident, or dealing with a head injury sustained from the victim falling from high up,” she said.

“We will have ambulances on site, but we do not want people to panic because it’s just an exercise. We will have signs posted at Nai Yang Beach to tell people that the International Medical Rally is on.

“Tourists are welcome to watch the competition,” she added.