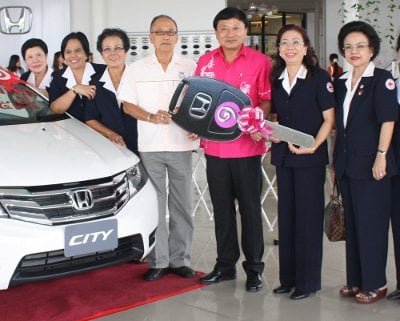 PHUKET: This year’s Red Cross Fair will be held from December 29 to January 8, 2012 at Saphan Hin central stage in Phuket Town.

The opening ceremony, starting at 6pm on December 29, will feature a fireworks show, and performances by nationally-renowned acts will be staged every night.

As in years past, the most anticipated event will be the charity lucky draw and its many prizes on offer.

This year one lucky person will be driving away the first prize, a Honda City car. The Red Cross Society has also provided a motorcycle, two gold necklaces, three refrigerators, four 21-inch televisions and 30 desk fans as additional prizes.

The prizes are not as extravagant as they have been in past years, according to Sarawut Rakkhao of the Thai Red Cross Society office of Phuket.

“This year, we have had to reduce the value of the grand prize from a house to a car due to flooding in central Thailand,” he said.

“The Red Cross always asks for a donation from the government to assist in buying the prizes for the fair. This year we asked for a smaller donation to avoid diverting government money from flood victims,” he added.

Apart from the evening entertainment, the fair will also feature many stalls selling food and beverages, souvenirs and household goods at discounted prices.

There will also be educational booths set up by local organizations and the usual games of chance for the whole family to enjoy.

Those who are feeling lucky enough to win the grand prize, or who just want to support a worthy cause, can buy tickets at the Thai Red Cross Office of Phuket, the Provincial Operations Center (POC) at Provincial Hall, or at the event itself.