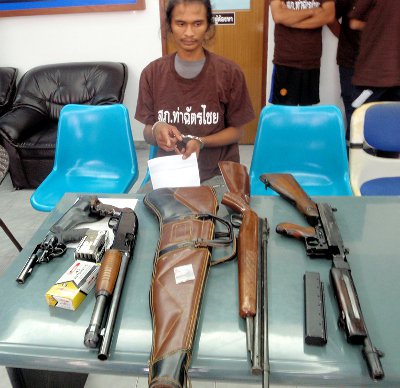 PHUKET: Police conducting drug raids on three houses in Mai Khao, at the northern tip of Phuket, today seized a slew of guns, including a .45 Thompson submachine gun.

Chaicharn later confessed to police that the drugs belonged to him and that he sold them to local youngsters, said police.

Samruad “Wew” Jansida, 35, and Warakij “Don” Pannurak, 18, were also arrested in the house after their urine tested positive in a spot test for drugs.

The two confessed they had taken drugs, police said.

The officers then raided the home of Pornthep “Tung” Sombun, 22, where they found a variety of illegal guns hidden throughout the house.

Police seized a .45 Thompson submachine gun along with 47 bullets and a magazine loaded with 30 bullets as well as a rifle (with no registration number), a shotgun, a Steven Air rifle and a Smith & Wesson .38 handgun with 48 bullets – plus two bullets still in the chamber.

Pornthep told police that the crystal meth and the air rifle belonged to him, but that the handgun and the shotgun belonged to his older brother, who is currently serving a jail sentence at Phuket Prison.

He also explained that although he was found in possession of the Thompson submachine gun, he did not actually own it.

A man wanted to borrow 30,000 baht and left the classic war weapon with Pornthep as collateral. The gun was to be returned when the man repaid the debt, he said.

The last raid of the day, at a house in Sakoo, resulted in the arrest of Chatri Chaidham, 35.

Police conducted another spot test for drugs, for which Chatri tested positive and he confessed to owning drug-taking paraphernalia found in the home.

Also arrested at the house were Prasert Makaseng, 28, and a man named by police only as “Abdullah”, age 23.

The men were found in possession of 40 leaves of kratom (Mitragyna speciosa), an indigenous plant that acts as a stimulant when ingested.

They confessed to police that the kratom belonged to them, said police.

“Police are continuing their efforts to eradicate drugs and war weapons. People can anonymously inform police of any activities involving drugs at any time. Every police officer is ready to work hard throughout the New Year to protect against bad things from happening,” Tah Chat Chai Police Superintendent Col Sakchai Limcharoen said.