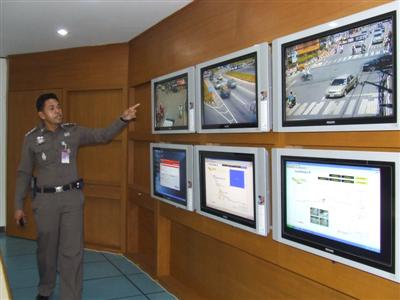 PHUKET CITY: A new project at Phuket City Police Station has the worthy goal of providing disabled people with jobs and a salary.

But there’s a snag: the control room is on the fourth floor of the building – and there are no elevators.

Phuket City Superintendent Wanchai Ekpornpit, who initiated the project, is determined to see it succeed.

His team are trying to work out how to get the volunteers up the stairs, he said.

“The problem is that disabled people, especially those who have lost legs, can’t get up there,” Col Wanchai said. “We can’t afford to install an elevator.”

“We may have to limit the selection process to people who can manage to get up the stairs by themselves with a walking stick,” he added.

Col Wanchai said he planned to ask the Phuket Disabled People’s Association for the volunteers.

The nine people chosen would work in groups of three in eight hour shifts, he said.

Each person would be assigned one monitor to watch.

Although there is currently no budget to pay the volunteers, ultimately they will receive a salary, Col Wanchai said.

Funding has been requested from the Don’t Drive Drunk Foundation, he said.

The initiative is not the first innovative project launched by Col Wanchai.

In September the coffee-loving colonel launched a ‘police welfare project’ in the form of ‘The Seat’, a coffee shop at Phuket City Police Station.

All Phuket City Police officers receive a share of the profits made by The Seat.

A similar project to involve disabled people in the fight against crime is also being planned for Kathu Police Station, the Gazette has learned.