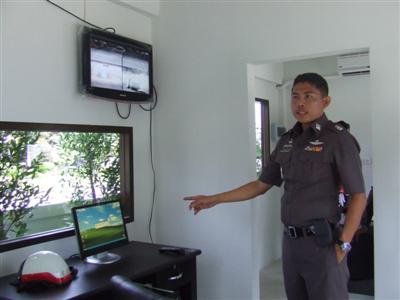 A second room will be used as a ‘one stop service’ center for the collection of traffic violation fines.

At 10am on Saturday, Phuket Provincial Police Deputy Commander Col Chalit Tinthanee presided over the opening ceremony for the new office, which is next to Cherng Talay Police Station on Srisoonthorn Road.

The building took around one month to build.

Lt Col Prawit Engchuan, who heads the Cherng Talay Traffic Police, said all the office equipment, including TVs for monitoring the CCTV cameras and the tables and chairs, had been donated to the police by the Wasi Construction Company, Laguna Phuket and the Wan Angkarn (Tuesday) Club of Phuket.

The CCTV control room will be manned by 11 Cherng Talay Traffic Police officers as well as two volunteers from Cherng Talay Municipality.

Some of the cameras are used to monitor intersections, while others monitor crime hot-spots such as Soi Cherng Talay 16, where there are two cameras.

There are three at the junction just outside Cherng Talay Police Station.

Phuket gets ready for Loy Kratong