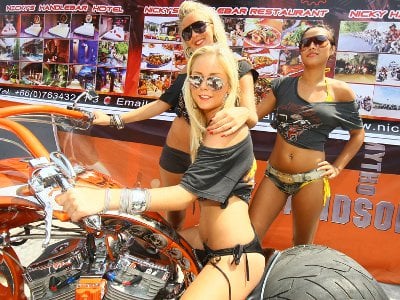 The festival started at 3pm at Patong Beach football field where the Motorcycle Exhibition Festival will carry on until midnight.

However there’s plenty of other attractions going on concurrently across the beach road at Loma Park.

At 4pm began two hours of fun at the Beach Party involving “Biker games” and two bands will duke it out in the music contest.

Phuket tattoo artists will be showing off their art from 6pm followed by a “fire dance show” at 7pm and more fun games until 8pm, when culture takes front of stage with a Thai classical dance show.

After the dancers exit the stage, the spotlight will fall on the organizers of this year’s event – the Heron club and Phuket Riders Club – for the opening ceremony.

At 8.30pm the first of three bands from Rock City will come on stage. Each band is programmed for a 20-minute performance before the lovelies for round one of Miss Phuket Bike Week take over.

Once all the men have finish drooling it’s music time again. This time four Thai bands on stage from 10pm to midnight, at which time the prize draw will be run. If you don’t win, don’t worry as half an hour later the live music is back with five Phuket bands performing.

Phuket Bike Week festivities continue tomorrow and, of course, for the rest of the week, including a formal opening by Phuket Governor Tri Augkaradacha, himself a Harley-Davidson owner.