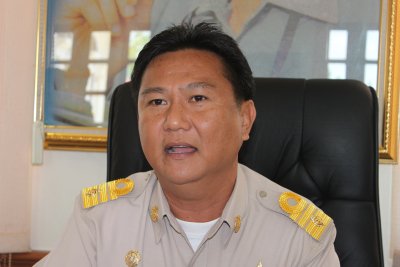 PHUKET: The fourth and largest tremor of the day hit Phuket at 3:10pm today, a 3.3 magnitude tremor clearly felt across the island with a large sonic boom clearly heard at the offices of the Phuket Gazette, about eight kilometers southeast of the epicenter near the municipal market in Thalang.

Other tremors recorded by the Thai Meteorological Department (TMD) earthquake monitoring station today are:
1:18pm: 1.9 Richter
9:57am: 2.6 Richter
2:34am: 3.2 Richter

Srisoonthorn Municipality sent out a “confidence building” team early this morning to calm local villagers following the 3.2 Richter event at 2.43am.

Srisoonthorn Mayor Worawut Songyot said while the quakes scared many people, others were just carrying on with life as normal.

“The aftershock [early this morning] scared many people, especially the elderly. However, the earthquake monitoring center will watch the situation closely. There is nothing to worry about,” said Mayor Worawut.

“Regardless, I will visit villagers with my team to cheer them up and see if any damage occurred from last night’s event,” he added.

Thalang District Chief Naruenart Supattaraprateep yesterday called community leaders and village headmen from all subdistricts to a meeting at Thalang District Office.
.
The main purpose was to inform community leaders how best help villagers affected by the 4.3 Richter scale earthquake on April 16, which had its epicenter at Baan Lipon and Bangkham Moo 2 Srisoonthorn, Thalang.

Chief Naruenart said the earthquake on April 16 was not just felt in all six Thalang subdistricts. It scared many people, but only caused minor damage to a few dwellings, he said.

Thalang District Office is accepting applications from residents whose houses were damaged and want assistance from Phuket Province to help cover the cost of repairs.

“So far residents from 104 homes in the Srisoonthorn area and 10 in Pa Khlok have registered. We are now inspecting other areas of Thalang, including our own office, which has developed quite a few cracks,” he added.

Chief Naruenart requested all 46 community leaders to inspect damages in their areas of responsibility and submit reports back to him today for submission to the Phuket Governor.

Homes with partial damage are eligible for 20,000 baht, while those completely destroyed can apply for 30,000 baht, he said.

“I have not yet received any reports of homes completely destroyed,” Chief Naruenart said.