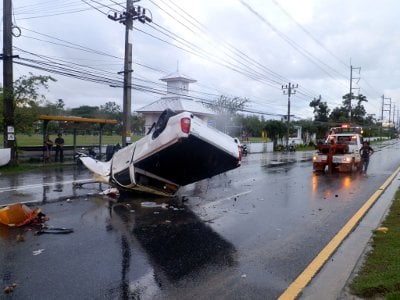 PHUKET: A speeding pickup truck crashed into a pedestrian footbridge in Phuket last night, spreading fear of yet another earthquake tremor and causing a one-hour traffic tailback.

Thalang Police were notified of the crash in front of the Muang Thalang School on Thepkrasattri Road northbound at 5:45pm yesterday.

Arriving at the scene, Phuket Kusoldharm Foundation rescue workers found the wreckage of a white Toyota Hilux pickup overturned in the middle of the road, its engine lying about 25 meters away by the median strip curb.

The driver of the vehicle, 31-year-old Pa Khlock resident Surachet Chaithongwik, managed to crawl from the wreckage conscious. He was put on oxygen and rushed to Thalang Hospital, said rescue workers.

Relatives at that facility said they intended to transfer Mr Surachet to a better equipped facility in Phuket Town as soon as possible.

Despite the damage to his vehicle, Mr Surachet’s injuries appeared to be relatively minor. He was conscious throughout and had no open wounds, said rescue workers.

A Thalang Hospital nurse said she suspected he may have suffered bruised or broken ribs.

Witnesses said the Hilux was moving quickly along Thepkrasattri Road in rainy conditions when it suddenly lost control, jumped the median strip and then slammed against a heavy concrete support of the pedestrian footbridge in front of Muang Thalang School.

A group of teenagers playing football at the school said they initially thought the booming sound of the crash was another earthquake.

Thalang has been the epicenter of 25 earthquakes ranging from of 2.0 to 3.3 Richters since an initial 4.3 magnitude tremor last Wednesday.

Motorists driving along Thepkrasattri Road northbound, the main artery heading off-island and to Phuket International Airport, had to wait about an hour in traffic while rescue workers treated Mr Surachet and cleaned up the wreckage.