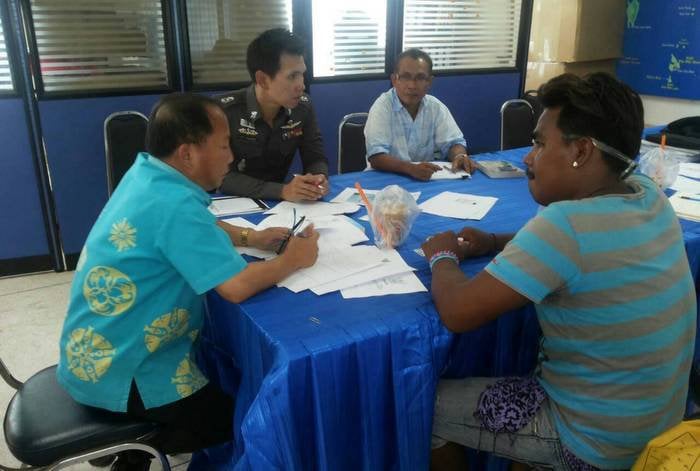 PHUKET: The captain and engineer of a tour boat anchored off Phi Phi Island have been charged with dumping oil into the sea after officials saw Facebook photos that had gone viral.

Krabi Marine Police, the Krabi Marine Office and officers at the national park at Phi Phi yesterday called upon boat captain Karin Onkaew and engineer Kriangdet Polsakdet to start an investigation and to press charges.

“They told us that they were fixing the engine and that oil accidentally leaked out,” Maj Anurak Parinyasathiragul, chief of the Krabi Marine Police told the Phuket Gazette this morning.

Officers checked for an oil slick after charging the pair, but were unable to find any evidence of the oil released into the sea.

However, aerial photos shared on Facebook by Thon Thamrongnawasawat on April 30 clearly showed oil leaking from the boat.

“They [Capt Karin and engineer Kriangdet] have both have been charged for releasing oil into the sea under the Act of Navigation in Thai Waters. The penalty can be up to three years in prison, a fine of up to 60,000 baht or both,” Maj Anurak said.

“They will also have to pay for any damages that the oil made to the environment, and for any cleanup operation that may be required.”

However, the boat, Capt Karin and all crew on board are legal and have all required documentation, Maj Anurak added.

In addition, the two men have also been charged with releasing oil in a national park.

“They have been handed over to Krabi City Police to face charges. The penalty they will face will be up to the court,” Maj Anurak said.