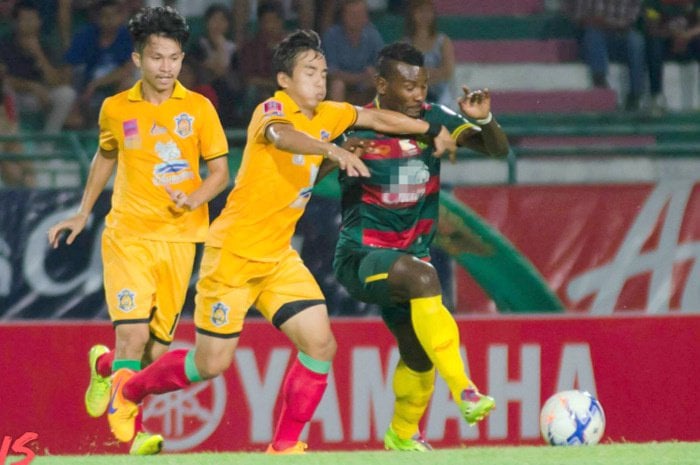 PHUKET: Phuket FC maintained their abysmal record away from home on Wednesday, when they gifted Prachuap FC their first home win of the season.

The loss saw Prachuap rise to fifth place on the Yamaha League 1 table, while Phuket’s Ronins slipped from fifth to sixth place.

Prachuap striker Neto Cossantos netted two goals: one at end of the first half, and another from the penalty spot in the 69th minute.

The Ronins changed their starting lineup for the match, with only half the team who outclassed Chiang Mai FC in Phuket last Saturday taking to the field against Prachuap.

The changes saw Phuket field a more defensive squad, but the tactic backfired and the team were overrun by a more aggressive Prachuap FC.

“We must forget Prachuab FC and look forward to our next match against our arch rival Krabi FC at home,” said Phuket FC Head Coach Songyot ‘Dang’ Klinsrisuk.

“We have rested some of our key players for the big match this weekend, and we’re looking to take all three points from our rival neighbors.”

Phuket FC are on a home-turf winning streak, after completing their home double last week by securing all six points in two matches, which elevated the team to fifth position in the 20-team football league.

After defeating Samut Songkram 2-1 on April 22, the Ronins brought their swords crashing down on visiting Chiang Mai FC at Surakul Stadium last Saturday.

The northerners had a dream start to the match. After just four minutes, Jaroonsak Somkong headed the ball into the net from a left corner kick delivered by Chanatpol Sikhamonthon.

But their joy was short-lived: The Ronins replied with an equalizer only two minutes later. Vasan Samarnsin broke into the penalty area and chipped the ball over Chiang Mai FC goalkeeper Kritsada Nonchai to score.

Phuket FC continued creating scoring opportunities, and missed a gifted chance to take the lead in the 19th minute, when Moussa Sylla nabbed the ball from a poor clearance by the Chiang Mai defense.

Sylla fired a shot from 20 yards out, but his shot was beautifully saved by Chiang Mai keeper Kritsada.
Phuket FC maintained the pressure – and control of the game – throughout the second half, and missed another chance to take the lead in the 52nd minute.

Ronins midfielder Alef Pochi passed a brilliant ball through the Chiang Mai FC backline to Berlin Nlome Ndebi, who had only the keeper to beat, but his low shot was too light and easily saved by keeper Kritsada.

Chiang Mai’s chances of retaliation suffered a blow after defender Asawa Singthong was sent off on receiving his second yellow card in the 60th minute for a nasty challenge on Phuket FC’s Andre Luiz Lopes.

A long ball crossed from the right by Lopes was improperly cleared by keeper Kritsada and the ball spilled to Phuket FC’s top scorer Berlin, who headed it home to take the score to 2-1.

Berlin was later named Man of the Match for his outstanding efforts on the field.

The win took Phuket FC to the fifth place overall on the 2015 Yamaha League 1 table. The Phuket side was in equal third place on points, but fifth on goal difference – that was until they went up against Prachuap on Wednesday.

The Phuket FC vs Krabi FC derby tonight will be played at the Ronins’ home ground at Surakul Stadium, near Central Festival Phuket. Kickoff is at 7pm.