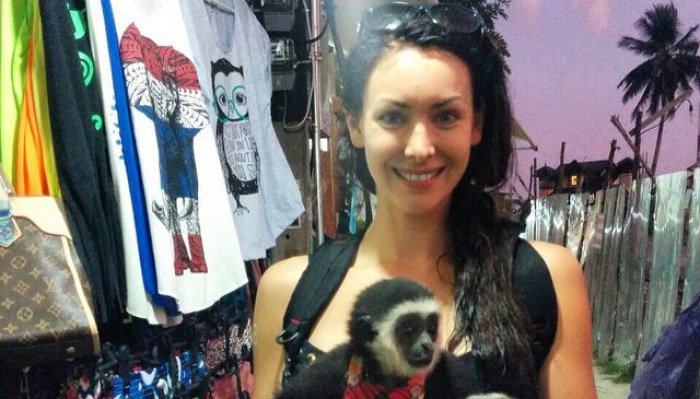 PHUKET: Phi Phi Island Police are investigating the exploitation of animals on the island following former Miss Universe Natalie Glebova posting a photograph of her posing with a gibbon in Ton Sai on Instagram on Monday.

The photograph posted on the popular photo-sharing site showed Mr Glebova smiling and holding the baby gibbon, which had been dressed up in a tartan apron and pants. Under the photograph on her private account, the Russian-Canadian beauty queen wrote, “Cutest gibbon in the cutest little outfit!”

As of this morning, the photograph had been removed from her account.

Police on the island told the Phuket Gazette today that they were unaware of the Instagram post, or of Miss Glebova’s visit. However, they vowed to start looking for the protected species and the tout that owns it.

“We will try to track down and apprehend the owner of the gibbon and have the animal confiscated,” Lt Col Danai Niyomdecha of Phi Phi Islands Police said.

Plans are underway to set up a new office on the island called “Guardian of the Park” that will be responsible for protected species and other animals in the park, explained Phi Phi National Park Assistant Manager Boonname Chauyradom,

“Construction of the new office is already underway on the island at Ao Ling. We hope it will be operational very soon,” said Mr Boonname.