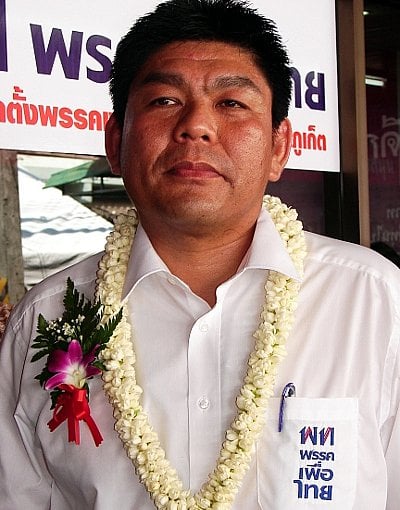 PHUKET: The Pheu Thai Party yesterday announced Wisit Jai-arj as its candidate for the Phuket District 1 constituency seat in Parliament.

The announcement was made by Dr Olarn Chaipravit, a Pheu Thai board member, at the opening of Mr Wisit’s campaign office in Phuket Town.

Also present at the event:

He was a consultant to Phuket City Mayor Somjai Suwansupapana until declaring his candidacy and has served as a committee member of the Phuket Chamber of Commerce.

The Democrat Party has yet to announce who they will field as a candidate in Constituency 1, which covers all of Phuket Town and some surrounding areas.

Speculation is rife that politician Anchalee Vanich-Thepabutr might throw her hat in the ring, now that her husband and former Phuket MP Tossaporn Thepabutr has said he will not stand for re-election.

Mrs Anchalee served as Secretary-General to the Prime Minister until Abhisit Vejjajiva dissolved parliament earlier this month and the date for the general election was set for July 3.

Phuket Live Wire: iPad2 in Thailand is a steal