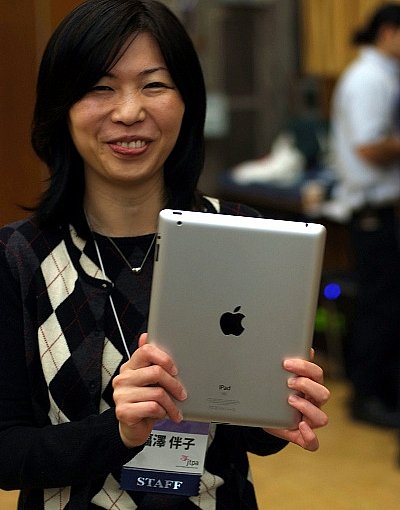 PHUKET: The Tourism Authority of Thailand should take out a full-page ad in the New York Times. “Fly to Thailand,” it could say, “and get a 20 per cent discount on a new iPad 2.”

Hard to believe, but the iPad 2 is significantly cheaper in Thailand than in the US – and the savings are even greater if your point of reference is in Europe.

I wrote about the iPad 2 a couple of months ago. People who lined up for the iPad 2’s initial release in the US at that time still, with rare exception, sing its praises: faster, lighter, two cameras (not particularly good ones, but good enough), and that glorious display.

Apple’s iMovie only works on iPad 2, and Real Racing 2 HD crawls on the original iPad, so there are reasons – besides Angry Birds Rio – for upgrading.

In Beijing, a fistfight broke out in the Apple store during the iPad 2 launch there on May 7: four people injured and a demolished glass door. Apparently a scalper tried to cut in line, and an Apple employee took umbrage. Hey, in China, even fake iPad 2s sell out.

Here in Thailand, all of the major Apple shops in Bangkok sold out of iPad 2s on the first day (May 6), some within hours of opening. Surprisingly, several Phuket locations still had full stock available last Saturday. I checked the PowerBuy at Jungceylon and they had all of the models available (WiFi and “3G” HSPA), with all of the memory options (16 GB, 32 GB and 64 GB), and both colors (white and black).

At the Computer Clinic, I heard that several other Phuket Apple shops had stock as well. If you want one, grab it quick.

Here’s how the pricing turned out.

In the US, Amazon.com lists many retailers with the entry-level 16 GB iPad 2, WiFi only, at US$599, plus shipping. That’s 18,100 baht at current exchange rates. Plus shipping and/or local sales tax. In Thailand, the 16 GB WiFi iPad 2 lists at 15,900 baht – and they’re widely available at that price.

Do the math, and you’ll see that buying an iPad 2 in Thailand is 12 per cent cheaper than in the US. Moreover, the list price here includes VAT, so if you’re a tourist and you claim the VAT refund at the airport, you get a discount of just under 20 per cent compared to the US.

If you commonly buy your electronics in UK, hold onto your Bowler.

Amazon.co.uk lists the iPad 2 16 GB WiFi at GBP489, plus shipping. That’s a whopping 24,200 baht. Buy the same iPad – exactly the same, no differences at all – from your local Phuket dealer and you save more than 34 per cent. Add in the VAT difference, and local Limeys save more than 40 per cent by buying in Thailand.

The TAT should take out two full pages in The Times or The Guardian. It’ll probably get more attention than page 3 of The Sun.

People commonly ask me why the iPad is cheaper here than in the US, UK or Europe. As best I can tell, Apple set the price of the original iPad back when exchange rates weren’t as “friendly” (depending on how you look at it) as they are now. Apple has continued to sell iPad 2s at the original iPad price, all over the world. The result is a windfall for buyers in Thailand.

See, there are hidden benefits to living in Phuket.

There’s one truly amazing local app for the iPad that you don’t want to miss – and I’m not saying this because I’m biased: Right now, you can get the full content of the Phuket Gazette free on the iPad using the Gazette’s iPad App (details here).

The news is updated constantly, and you can use the app to place ads or make entries in the Events calendar or to comment on articles (like this one) in the Gazette’s forum. It’s the first app you see when you type “Phuket” into the iPad’s AppStore utility.

If you know of any other Phuket-specific apps, either available now or in the making, respond to the online version of this article in the forum, and let me know. I’ll take them for a whirl.

Able Wanamakok’s third Facebook 101 seminar is currently under way. The three-part series started on May 14 and will continue on May 21 and 28.

Facebook 101, you may recall, takes attendees through the basics, from setting up a business (or organization or charity) page, designing it, drawing attention to it, and then using the page to reach out to Facebook users.

Johan Lofgren helps with the more technical parts in these seminars, but you don’t need any experience with Facebook to attend them – and they’re free of charge. The seminars are sponsored by Khun Woody’s Sandwich Shoppes, Able’s AW PR and Marketing, and Johan Lofgren’s onsite.in.th.

We’ve had so much interest in the seminars that Able’s going to run the fourth Facebook 101 seminar in Thai, on June 4, 11 and 18. Sign up by going to www.facebook.com/SandwichShoppe and on the left click the link marked Facebook Seminar. Yes, the sign-up sheet is in English, but the fourth seminars will be presented in Thai.

The next Computer Clinic will be 10am to midday on Sunday, June 5, at the Sandwich Shoppe in Patong, in Aroonsom Plaza, opposite the Patong Language School and near BYD Lofts.

As always, the clinics are free, and open to anyone interested in (or bothered by) computers in Phuket. There’s a lengthy question and answer period, and lots of help from kindred souls. So if you have a question about computers in Phuket – or PCs in general – drop by and we’ll get you some world-class answers.

Live Wire is Woody Leonhard’s weekly snapshot of all things internet in Phuket. Woody’s a Senior Editor at Windows Secrets Newsletter, and is Senior Contributing Editor at InfoWorld. He’s written more than 40 computer books, including Windows 7 All-In-One For Dummies. To see what Woody’s up to in the international press, and to keep on top of the latest patches and problems with Windows and Office, drop by AskWoody.com. Follow Woody on Twitter: @PhuketPC.