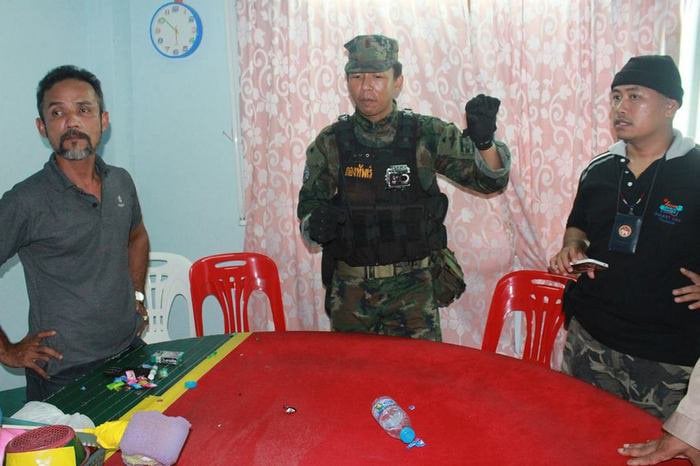 PHUKET: A Phang Nga police officer and 12 others were caught and arrested for gambling on Friday.

The arrest follows weeks of complaints from Kathu residents to Phuket Governor Nisit Jansomwong about loud noises coming from a house near the Ket-Ho police box, as well as many cars being parked haphazardly and blocking the road.

The complaint was passed from Governor Nisit to Damrongtham Center Chief Prapan Kanprasang, who then handed it over to Lt Somphop Kamthana of the Royal Thai Navy Third Area Command and Thung Thong police, who raided the house on Friday.

“When we arrived at the house, the front door was locked,” Mr Prapan said. “However, Navy officers and police were able to break the lock to gain access to the house and secure the premises so none of the suspects could escape.”

“Among the 13 suspects arrested were Lt Pairat Jindawong of Phang Nga Provincial Police and Sunisa Jongthong, 48, who owned the house and organized the game,” he said.

All 13 suspects were taken to Thung Thong Police Station and charged with illegal gambling. Ms Sunisa was also charged with operating a gambling ring.