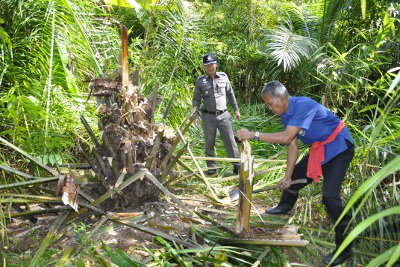 PHUKET: Several high-ranking Phang Nga officials have been implicated in the operation of an illegal 16-rai palm plantation raided by officers yesterday after the site was deemed to be encroaching on protected park land.

“However, under the National Reserved Forest Act, BE 2507 (1964), the occupation of the land [in question] is illegal as it is inside the Ton Pariwat Wildlife Conservation Area,” he said.

Saman Chainarong, deputy commander of Phang Nga Provincial Police, said his officers were working with associated agencies in their search for the alleged transgressors.

“We will take stern legal action against them, as well as the government officers who were involved in producing the land-ownership documents for that plot,” he said.

The colonel pointed out that over the past five years his officers had taken action against almost 1,000 cases of encroachment onto the Ton Pariwat Wildlife park.

With the 16 rai of palm trees now cleared, District Chief Prakob explained that officers will replant a variety of trees on the land as part of a nationwide tree-planting project to honor HM Queen Sirikit’s 80th birthday earlier this year.