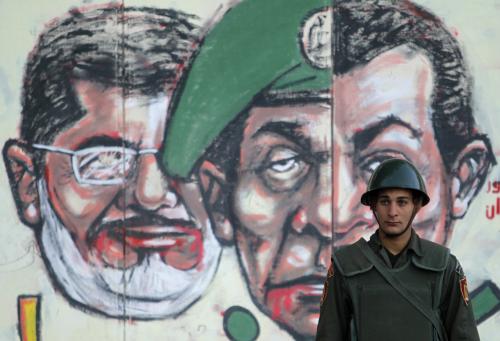 PHUKET: Supporters and opponents of Egyptian President Mohamed Mursi staged final rallies today before a divisive referendum on a new constitution championed by the Islamist leader as a way out of the worst crisis since the fall of Hosni Mubarak.

Cairo and other cities have seen a series of often violent demonstrations over the past three weeks since Mursi assumed sweeping new powers to push through the constitution, which he sees as a vital element of Egypt’s transition to democracy.

At least eight people have died and hundreds have been injured and a leading opposition figure warned of more blood on the streets during the voting tomorrow and next Saturday on a draft the opposition says is too Islamist.

The referendum asks Egyptians to accept or reject a basic law that has to be in place before national elections can be held early next year – an event many hope can steer the Arab world’s most populous nation towards stability.

To bolster support for the constitution, the Islamist Muslim Brotherhood, which propelled Mursi to power in June’s presidential election, will assemble at a mosque not far from the president’s palace in Cairo.

A little later in the day, the liberal, secular and Christian opposition will rally in favour of a vote against the basic law outside the palace and in Tahrir Square, symbolic centre of the revolt that toppled Mubarak in 2011.

“During the referendum, I believe there will be blood and a lot of antagonism, so it is not right to hold a referendum,” Ahmed Said of the National Salvation Front told Reuters.

Despite the opposition push for a “no” vote, the measure is expected to pass given the well-organised Muslim Brotherhood’s record of winning elections since the fall of Mubarak. Many Egyptians, tired of turmoil, may simply fall in line.

Solid indication
The first round of voting tomorrow will take place in Cairo and other major cities and could presage the overall result if it is a fairly solid “yes” as many expect.

To provide security for the vote, the army has been deployed in force, with state television showing ranks of soldiers receiving their orders to protect polling stations and other government buildings. About 120,000 troops and 6,000 tanks and armoured vehicles will be deployed.

While the military backed Mubarak and his predecessors, it has not intervened on either side in the present crisis.

The vote has proved hugely controversial, with supporters of the Islamist Muslim Brotherhood fighting on the streets with opposition groups.

The opposition says the constitution does not reflect the aspirations of all 83 million Egyptians because it is too Islamist and tramples on minority rights, including those of the Christian community. Mursi’s supporters say the constitution is needed if progress is to be made towards democracy.

While the opposition is telling its supporters to vote “no”, it has also threatened to boycott proceedings if guarantees for a fair vote are not met. But staying away from the process could risk a loss of credibility, political experts say.

Many ordinary Egyptians are well aware of how contentious the constitution is, but simply want to get it out of the way so the country can move ahead to a more stable future.

“Do I like the constitution?” asked Ahmed Helmy, a 35-year-old engineer in Tahrir Square. “No. But I want the referendum to take place so we can get out of this prolonged transitional period that’s making me and millions of Egyptians wish we had left the country.”