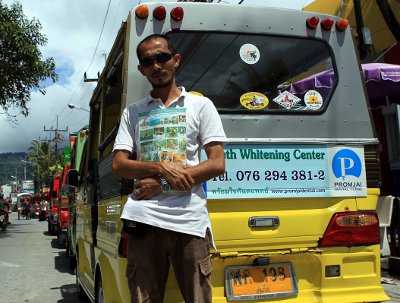 PHUKET: Following numerous complaints about overpricing and poor service, the Phuket Land Transport Office will impose order on black-plate taxis and tuk-tuks operating in both Patong and Kamala, it was announced yesterday.

Mr Kanok said after the meeting that members of taxi cooperatives operating both illegal “black plate” taxis and legally-licensed green plate taxis will form an umbrella group to ensure that taxis become registered and fitted with meters to ensure an equitable, distance-based fare structure.

A unnamed private firm was prepared to invest to back up the plan, according to an official press release.

The meeting reportedly follows two years of research on Phuket’s public transport woes by Pol Gen Phichit, who also serves as an advisor to the Marriott chain that operates several resorts on the island.

Under Pol Gen Pichit’s plan, unregistered “black plate” taxis and tuk-tuks in Patong and Kamala would get green license plates and be installed with meters.

The initiative reportedly enjoys the support of Preechavude “Prab” Keesin, president of the newly formed Patong Taxi Federation (PTF), as well as many resort operators in the two west coast towns.

If the plan becomes a reality, only green-plate taxis will be allowed to take part in a new “call center” operation that will dispatch taxis to resorts from a central location.

Under the current status quo, taxis and tuk-tuks generally monopolize areas in front of resorts or line up along the roadside waiting for fares.

The call center will likely be sited on a section of the new Phang Muang Sai Kor Road behind the Jungceylon shopping complex, according to sources.

The move is intended to reduce the number of unregistered tuk-tuks and taxis that crowd the beach road, thus providing more parking access for ordinary vehicles.

Once implemented, all green-plate taxis would eventually be installed with meters in order to do away with haggling over prices, thus improving public transport options for tourists.

Doing away with short-term exploitation of tourists and providing reasonably-priced, quality services is a key to achieving this, he said shortly after taking up the gubernatorial post early last month.